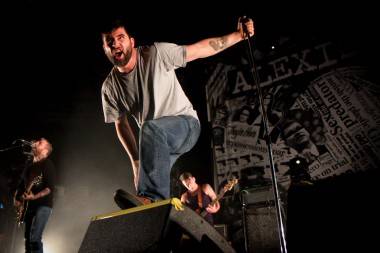 The St. Catharines punk group is on a 10th anniversary farewell tour, a little more than a year after the band members announced they were splitting. The tour began inÂ Â in London UK and will end with two shows at the Sound Academy in Toronto.

We haven’t quite heard the last of Alexisonfire, however. According to an August 2012 press release, “The band is workingÂ onÂ a discography, vinyl box set which will include 12” LPs of each studio release and out of print 7” EPs including, but not limited to,Â Math Sheet Demos,Â Crisis b-sides,Â Insulation Tapes,Â BBC Sessions. The box set will also feature a photo booklet and other exclusive items.”

Beyond all reason, Alexisonfire’s popularity spread beyond Canada, to include theÂ U.S., UK, Europe, Australia, New Zealand and Japan.