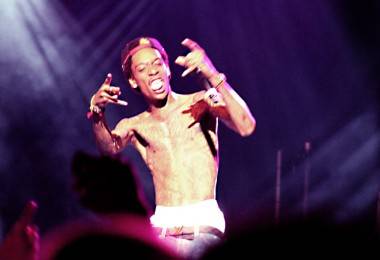 A giant 20-foot bong, two mascots – a lighter and a joint- and a thick and permanent plume of smoke occupied Rogers Arena on Tuesday night. The Wiz Khalifa concert seemed to be more of a celebration of marijuana than a musical event. Perhaps rightly so as election night saw that weed was made legal in Washington and Colorado for recreational use, in defiance of federal law.

The show included Khalifa and all of the Taylor Gang. In order, Tuki Carter, Berner, Lola Monroe, Chevy Woods, and Juicy J all graced the stage before Wiz. Juicy J, aka Jordan Houston, was one of the highlights of the night as the newest member of the Taylor Gang unexpectedly ignited the crowd of 6000. Houston, of Three Six Mafia fame, ordered girls on stage to dance, commanded strangers to kiss, had girls showing their breasts, and started a party.

Almost two hours after Tuki started the show, Wiz Khalifa, aka Cameron Thomaz, finally made his entrance. Although the event was promised to be futuristic experience, having been named the 2050 tour, it seemed to be the complete opposite. Wiz came out dressed like a rock star in skin-tight jeans, a leather biker jacket and shades. His mic stand was draped in scarves just like Steven Tyler’s and most of the visuals leaned more towards the psychedelic than the futuristic.

Backed by live drums, keys, guitar and a DJ, Wiz performed for an hour and a half from his vast collection of work. After 2010’s classic mixtape, Kush & Orange Juice, Thomaz, a native of Pitsburgh, had a quick ascent into fame and pumped out large volumes of music. Cabin Fever preceded his major label debut Rolling Papers, and in this past year he released two mixtapes, Taylor Allderdice and Cabin Fever 2, in preparation for his second major label album, O.N.I.F.C. The set was an even mix of songs from all of these projects, making for a satisfying show for long-time fans and completists.

Despite Khalifa putting on a solidly entertaining show, most of the night seemed overly rehearsed. Every speech seemed planned. Every dance move a repeat from the previous show. Each layer of clothing seemed to come off at timed intervals, most noticeable as he took off his tank just in time for “Ink My Whole Body” near the end of his set.

However, this is to be expected of arena concerts, and Wiz carried the show well. He kept the audience, the majority of them stoned out of their minds, engaged and enthused and as he closed out the night with “Work Hard, Play Hard” he continued to demonstrate his skill as a live performer. The underwhelming single off his upcoming album O.N.I.F.C, came to life as Khalifa rocked out and convinced me that the song is actually pretty good. It isn’t. But his charisma carried the song, and the night.