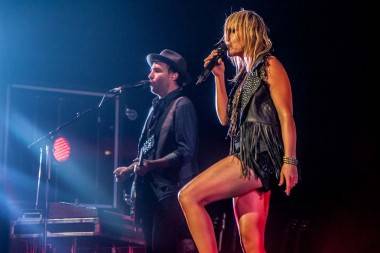 Metric is on its first headlining arena tour. For support, the Canadian/American indie-rock band brought along some support in the form of opener (and friends) Stars.

The two acts have had a close-knit relationship for years, with members of both dropping in and out of Toronto-based collectiveÂ Broken Social Scene.

And it seems to have worked–in fact, many of the fans at the Vancouver show seemed just as excited to hear the opener as they were the main act.Â In a recentÂ interview withÂ Ontario Citizen,Â Stars vocalistÂ Amy MillanÂ describes her Montreal-based indie-pop group as “the biggest band nobody’s ever heard of”, but you wouldn’t know it from the enthusiastic greeting the six-piece received Saturday night.

On the arena stage, Stars proved to be in high spirits, clearly riding high on the waves of their friends’ success. Their 45-minute set featured songs from at least a decade of albums, including new material from their recent album The North.

The excitement among the mostly young audienceÂ following Stars’ performance was palpable. One teenage boy in the front row exclaimed, Â “Are you ready for Emily? Are you ready for the best rock star of our time? I don’t think you’re ready!”

Sure enough, “Emily”–as in Emily Haines, Metric’s lead singer–is a rock star, and the focus of the band’s live show. Her onstage persona outshone the rest of the band members, thanks in part to her outfit–leather-tasseled top andÂ short shorts showing off her long legs. Far more important than her appearance however was the substance of her performance. On a set that was mostly allocated to the new album, Haines’ vocals and keyboard playing were as much a force to be reckoned with as her indie-rock chic.

Haines and her bandmates have come a long way from playing bars and clubs and, based on Saturday’s show, they’ve rightfully earned their place on the arena stage.Â  I just don’t know why it took so long. 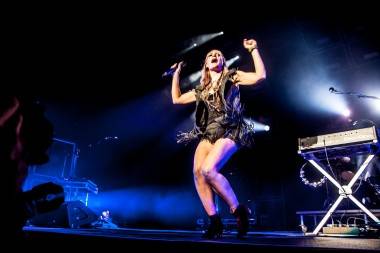 4 responses to “Metric at Rogers Arena”