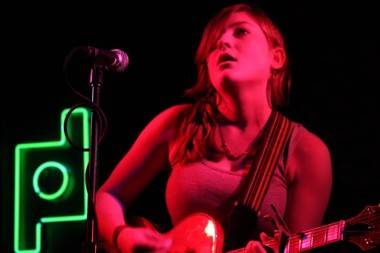 Francisco-based singer/songwriter Lauren O’ConnellÂ headlines a night of folk music this Saturday, Dec 1 at the Little Mountain GalleryÂ (26thth and Main).Â Joined by Vancouver roots talentsÂ Rodney Decroo, Kelly Haigh, Mac Pontiac, and The Minimalist Jug Band, she will play a selection of songs from her new albumÂ Quitters,Â her third full-length release.

O’Connell’s latest record has incredible range, with upbeat songs like “I Will Burn You Down”, with its heavy guitar to the waltzing, ethereally-delivered “The Same Things”. Originally from New York, she’s written songs since she was 15, and her lyrics demonstrate a great deal of symbolism and depth. The track “If Found/Gravity” describes a profound fear of forgetting, as she sings “Should I await some revelation /Â Some great blessing from above /Â So every memory be quelled /Of anyone I might have loved”. Laden with tenderness, all of her songs delicately portray the ambiguous underbelly of the human experience.

Recording all of her previous albums at home, working from inside a studio was a new experience for O’Connell. She chose a barn in the middle of nowhere where Tom Waits used to record, and went analogue instead of digital. Originally a YoutTube sensation, her career heads in a more mature direction, both in production and performance, as she starts to tour outside the United States.

Check out her performance at the singer/songwriter showcase this Saturday at Little Mountain Gallery .