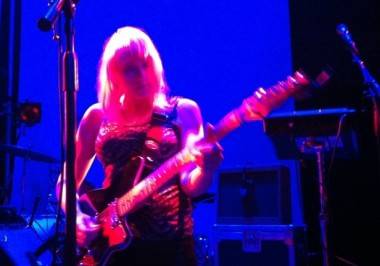 Dungeonesse is the latest pop music project from singer Jenn Wasner (Wye Oak, Flock of Dimes) and writer/producer Jon Ehrens (White Life, Art Department). The duo has been collaborating in a long- distance exchange of ideas. The result is a mechanized music machine that spits out experimental top 40 and R&B jams.

On their label Secretly Canadian’s Dungeonesse webpage, Wasner says, “”Something that Jon and I talk about a lot is the idea of reclaiming pop music; placing it squarely in the hands of, I dunno, say a couple of regular nerds from Baltimore.”

Both artists are intrigued about the nuts and bolts of making a hit song that is inclusive of their unique style. “I think we both knew that even if we intended to make something that was a straight ahead, radio-ready hit, it would come out sounding a little different because of both of our musical backgrounds in which the music we made did not have this intention,” adds Ehren.

The video debut of their first single, “Drive You Crazy”, was unveiled by Secretly Canadian this week. The single is filmed and directed by Matthew Yake at Baltimore’s Nudashank Gallery during a Dungeonesse dance party. The party’s atmosphere matches the song title in that flashes of dancing are seen intermittently in a moonstruck fusion of scattered confetti, bright lights, and kaleidoscopic patterns. At the center of the tornado of multi colors is the blonde-haired Wasner seen matching the colourful shapes and patterns around her.

One response to “Dungeonesse–’Drive You Crazy’ music video”