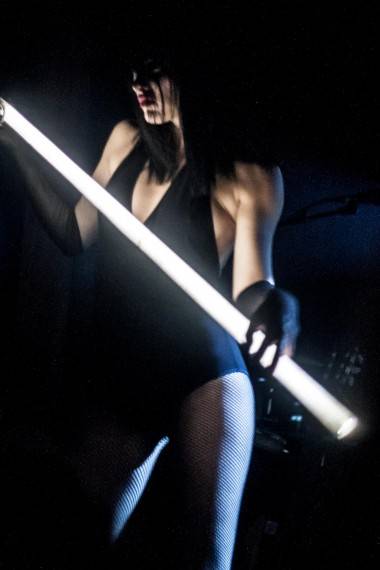 One of the most versatile, exciting bands now on tour, Nouvelle Vague is three women onstage in fishnets, looking like nuns in purgatory, performing a most diverse set of songs – from bossa nova to dirty blues – with a four-piece band and nothing to prove.

Marc Collin and Olivier Libaux created the band in 2004, with the idea to take hit songs from the 1980s, reinterpret them, and bring them back to life with a punk twist. They cover originals by The Clash, Billy Idol, and The Dead Kennedys, among others, with an evolving team of female singers – including Camille, Canadian Coeur de Pirate, and Yelle – helping to reinterpret the songs. And creating electricity with their stage presence. Because the women of Nouvelle Vague put on a show like you have never seen before.

At the Vancouver show at Fortune Sound Club on Tuesday, the three female singers included the lead vocalistsÂ MÃ©lanie Pain andÂ Lisette Alea Gonzalez. They were acked by Collin, Libaux, and two others on drums, stand-up bass, and electric bass.

The groupÂ opened with riotous covers of “Blister in the Sun” and “Dancing With Myself” before moving into darker, more suggestive performances like “Master and Servant” and “Escape Myself”, and closing with “Too Drunk to Fuck”. Red lights and black, backless leotards. Electric bass like a striptease. On one song, the only source of light onstage was a light sabre. A light sabre.

With all the performance tricks up their sleeves, and new percussive instruments and costume changes several times in a song throughout the show, make no mistake, Nouvelle Vague has heart. The band can go from pounding punk to a melodic ballad in minutes, with no loss in credibility.

The four-song encore ended with New Order‘s “Bizarre Love Triangle”, an honest, bare rendition of Nouvelle Vague original “In a Manner of Speaking,” and a group accompaniment of Joy Division‘s “Love Will Tear Us Apart”. On the last song, the chorus reverberated around and around the room as almost every member of an audience in love sang along.

One of the most engaging, fearless performances. What a sexy band.

Impudent, insolent, and alive, Nouvelle Vague offers a convincing argument for the idea that it’s more fun to be disreputable.

Watch for an album of original songs coming next year.