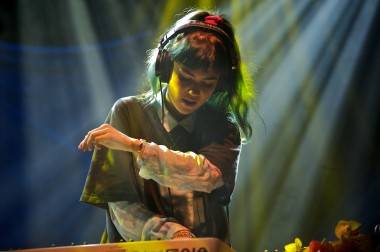 Vancouver native Claire Boucher returns as Grimes for a sold-out show at the Commodore Ballroom. It’s been a great year for Boucher, whose 2011 Visions album made the shortlist for the annual Polaris Music Prize (she lost to Feist) and has been playing bigger and bigger shows.

Unfortunately she’s had to cancel a few dates on her Canadian tour due to tinnitus, but in the meantime we have a great set of pics from last night’s show, and a few words from Snipe contributor Julia Kalininas, who writes: “Despite early mishaps on a tour she has called ‘cursed’, Grimes played an impressive set…

“The electro-house star who was shortlisted for the Polaris Prize this year tweeted her apologies onÂ Tuesday, announcing that she was cancelling her tour stops in Calgary, Winnipeg, and SaskatoonÂ because of hearing loss and tinnitus. She said she is trying to stay away from loud music for a while butÂ intends to finish the tour at a later date.

“But at the Commodore, the 24-year old made no mention of her medicalÂ problems. Instead, she played a solid hour-long set, to a packed venue of mostly 20 and 30-somethings. Head down, she focused on her synthesizers more than the crowd butÂ delivered hits like ‘Oblivion’ and ‘Circumambient’, both of which drew cheers from the crowd.

“She ended the set with the genre-defying ‘Genesis’ before explaining that she ‘kindaÂ hate encores, so why don’t we just do this right now.’ Her candour – and the encore – wereÂ appreciated.”