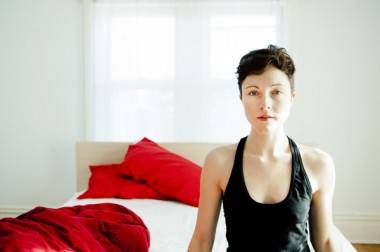 Following appearances at a bunch of festivals, including Lollapalooza and Osheaga, Minneapolis bandÂ PoliÃ§a is kicking of a North American tour at the Biltmore Cabaret Thursday Aug 16. You should see them.

Blogging for Time Out Chicago, Brent DiCrescenzo writes, “PoliÃ§a gives Bon Iver a boner. Give the Minneapolis band 50 minutes of your time and the enchantment spell will work its effects on you, too… Two dueling drummers and a bassist weave grooves that swell and recede. Singer Channy Leaneagh, today outfitted in a floral jumper, sways in the hypnotic bustle, tapping a blue effects box with ten silver buttons on its back, doubling her vocals, wrapping them in blurring delay. If reggae had originated in DÃ¼sseldorf, Germany, and Annie Lennox played svengali, it might come out of the wash like this…”

PoliÃ§aÂ is the brainchild of Minneapolis musicians Channy Leanagh and Ryan Olson. Both recorded and played live with Gayngs in 2010 before forming PoliÃ§aÂ with Mike Noyce from Bon Iver.

“As touring [with Gayngs] progressed and Channy got more comfortable with the band and singing the songs, she would reinvent the parts she was doing in brilliant ways. It made me want to see where else she could go” explains Olson in a press release.

In June 2011, they began writing together what would become PoliÃ§a’s debut album,Â Give You The Ghost.

The result is 11 tracks at the intersection of pop and digitised R&B.Â “The recurring theme of this record is ‘what in the hell just happened and who in the hell am I anyways’,” Leanagh is quoted in the press release.

The name PoliÃ§a refers to the word “policy”, meaning a definite course of action adopted for the sake of expediency.