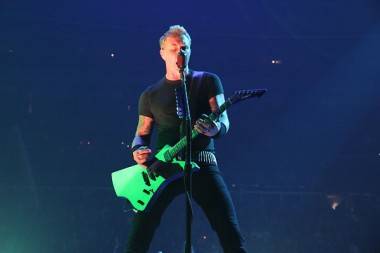 A few months ago it was announced that Metallica would be doing a two-night stand at Rogers Arena, in order to film a 3D concert feature.

Rumors abounded that that they were pulling out all the stops for these so-called Full Arsenal shows, which would include a massive, arena-floor-filling stage, elaborate set-pieces, pyro, lasers, and more props than you could shake a s(h)tick at.

On the second night of the stint, I got to my seat about five minutes before the lights went down (about 90 minutes after the scheduled start time of 7 p.m.). Ennio Morricone’s “The Ecstasy Of Gold” announced Metallica’s arrival onstage.

Roaring out of the gate with “Creeping Death” and “For Whom The Bell Tolls”, The Biggest Four instantly had Vancouver in thrall.

James Hetfield, clear leader and center of attention, is a hell of a frontman, and he knows how to whip his crowds up into the necessary frenzy. Several times throughout the evening, Hetfield referred to the screaming throng of thousands as “members of the Metallica family”. It was especially endearing as he introduced “Fuel” with a bit of a jab at Metallica’s less-popular back catalog: “Let’s see if you’re still with us after this one.”

Kirk Hammett, while a little more subdued onstage, lets his leads do the talking, and his guitar solos were impeccable, note-for-note perfect. Robert Trujillo, meanwhile, is, always has been, a bass monster: a crab-walking, low-slinging bottom-end monster. As for Lars Ulrich? Well, he gets to sit center-stage, behind that monstrous revolving drumkit. So there’s that.

The Full Arsenal Tour sees Metallica playing a handful of Western Canadian dates –two each for Edmonton and Vancouver- as a follow-up to their successful Mexico run of the same tour. Vancouver lucked out as the city they chose to film for the upcoming 3D concert movie.

We were also supposed to get heavy-metal hometown heroes Three Inches of Blood as openers (can you say “opening slot of a lifetime”?), but at the zero hour, they got nixed due to “unforeseen production elements.” Instead, apparently (I didn’t arrive until just before Metallica) comedian Jim “Half-Baked” Breuer came out and did a 30-minute set/pep-talk on how the crowd were supposed to act for the cameras. Needless to say, an opening set by 3IOB would have been way preferable.

Metallica’s set was a decent mix of classics and new (i.e. post 1991’s “black album”). It was especially odd to these old, jaded ears to hear the particularly enthusiastic response to later songs like “Fuel”. That’s not to say the classics weren’t also well-responded-to. But those latter-day songs signify Metallica in a different era, one of rock superstardom, post-heavy-metal, and to a lot of older fans they represent the band at their absolute nadir. So when the house lit up and sang along for “The Memory Remains”, it served as a poignant reminder of just how far removed we were from those halcyon El Cerrito garage days.

I mentioned, props, right? Oh yes: a gigantic electric chair with Tesla coils zapping it, descending from the ceiling for “Ride The Lightning”; tons of pyro; coffin-shaped lighting rigs for the newer songs; lasers, more pyro and film screens for Â for “One” and “Sanitarium”; a rather long-winded set-piece where a crew of boiler-suited maintenance techs came out onstage and built up Lady Justice “Doris” piece-by-piece during the entirety of Â “…And Justice For All”, only to finally finish the job, then demolish her again a minute later at the song’s completion; crosses rising from the stage for “Master of Puppets”; and of course, the “accident” at the end ofÂ  the main set, at the climax of “Enter Sandman”, which saw fake lighting trusses drop from the sky and a crew member “accidentally” get set on fire.

All of it so SpÄ±nal Tap, I half-expected an eighteen-inch Stonehenge to descend from the ceiling at any second.

Instead the band brought out some “emergency” lighting and smaller amps, trying to re-create a garage feel in this midst of this chaos, and then jammed out “Hit the Lights” and “Seek And Destroy”. Convoluted and corny? A little. Put it this way: as actors, Metallica make awesome supermegarockstars.

Silliness aside, Metallica pulled out all the stops for this show and ultimately delivered the goods. They’re even apparently adding a third show Monday with $5 tickets. But even if you missed these shows, don’t worry – I hear they’re turning it into a movie. 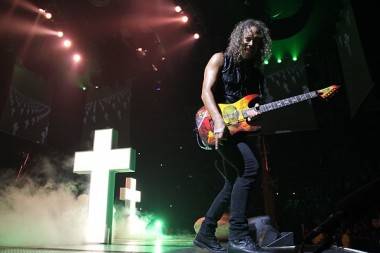