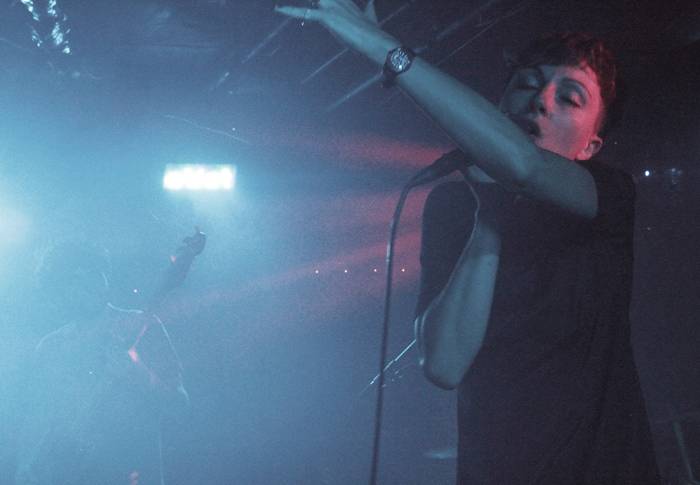 Review and photos – PoliÃ§a at the Biltmore Cabaret, Vancouver, Aug 16 2012

Doleful, pretty and languorous, PoliÃ§a‘s songs are inviting. But they don’t exactly put down their bonbons and leap off of the divan to open the door for you.

At least that’s the sense I get fromÂ Give You the Ghost, the Minneapolis band’s 2012 debut.

But, kicking off a North American tour last night, Channy Leanagh and her three-pieceÂ forced the songs out of their shells and into the mood lighting of the real world.

Any misgivings I had before the show – Â that PoliÃ§a might be more of an album/headphones band than a live act – were swiftly blown away by the room-filling combination of war drums and diva vocals. And Leanagh’s performance; eyes closed, head nodding, hand making shapes in the air, the vulcan-ish singer held our attention, at least when we could see her through the clouds of fog.

The highlights on record were the highlights live: the sinuous “Amongster”; the unravelling pop of “Dark Star”; the darkly cheerful “Leading to Death”. Â The decision to tour with two drummers is an inspired one – the massive beats transform the songs live, and showcase even more the power of Leanagh’s sultry, humid voice. Between the two more powerful forces, the bass might have gotten lost, but Bierden helped give the songs a more solid foundation.

AustinÂ KeultjesÂ andÂ MikeÂ Perry, aka Supreme Cuts, played a precisely-long-enough (about 35 minutes) of sample collages my girlfriend said reminded her of Animal Collective. The duo certainly had their adherents – a troupe of dancers, faces aglow, hugged and danced in front of the stage, as though warming up for Shambhala.

At their best, Supreme Cuts are definitely advancing the conversation between indie-rock and dance music. And they certainly put on a show that, in spots, had me wondering if they would overshadow the headliners. They didn’t, but I’m sure they helped spur PoliÃ§aÂ on.

2 responses to “PoliÃ§a at the Biltmore Cabaret”