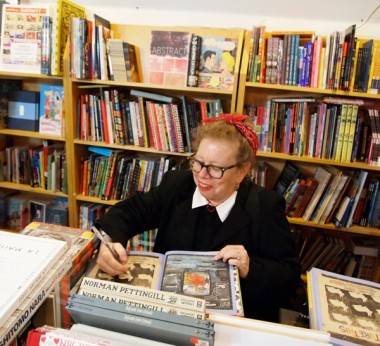 Cartoonist, humourist, comedienne and all-around good person Lynda Barry is coming back to Vancouver. The artist behind “Ernie Pook’s Comeek” comic strip and numerous collections and books will give her workshop Writing the Unthinkable at Studio 1398, 1398 Cartwright Street on Granville Island. The workshop is 10 a.m. – 1 p.m. Sunday Sept 30. It’s presentation of the Vancouver International Writers Festival. Lynda Barry was last in Vancouver with writers festival in 2010. At the time, she gave a modified version of her workshop. In it, she took the attendees through various exercises. At one point she asked us to remember and write about our first cars. Barry would ask various people to read whatever they’d written, and encouraged every single reader with a sincere “Good, good, that’s great.” It’s an experience I would expect few of us in that room will forget. Barry is perhaps best known for the aforementioned comic strip, which ran in various alternative weeklies, including the Georgia Straight, throughout the ’90s and into the ’00s. She’s also written two novels, Cruddy and The Good Times Are Killing Me. More recently, she has produced two books that are both guides and workbooks on creativity,Â What It Is and Picture This. Barry’s Internet presence is low-key, for the most part. But you can follow Lynda Barry on Tumblr. Tickets for “Writing the Unthinkable” are $40 per person, plus service charges. You can purchase them online atÂ VancouverTix.comÂ or by phone atÂ 604-629-8849. For more Lynda Barry, you can read Nathalie Atkinson’s recounting of her tour of Toronto with Barry here. You can also read our interview with Barry, in which she talks about the origins of the name Old Skull Popper among other things,Â here.