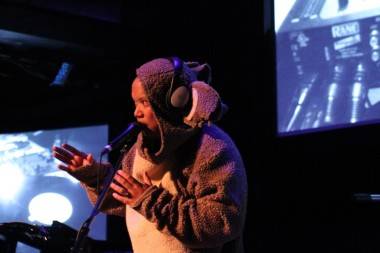 What’s weird about this Kid Koala show is that I did not anticipate aÂ night of gut-busting laughter.

I was expecting anÂ introspective evening listening to poignant compositions via headphones – a logical assumption considering his latest album,Â Space Cadet, is aÂ minimalist, almost Erik Satie-like accompaniment to his heartbreaking graphic novel about a space cadet and her guardian robot.

Only a handful ofÂ cities have bared witness to this unique set, and I was one ofÂ the lucky ones to have experienced it on the last of three consecutively sold-out Performance Works Theatre shows as part of the TD Vancouver International Jazz Festival.

The show began before we even entered the theatre.Â Space Cadet artwork (scratchboard sketches and sculptures), space-inspired imagery and retro equipment like a Roland’s Space Echo and an analog sampler (which loops a speaker’s voice onto a special gold record) populated the foyer.

Once inside, we were invited to listen to the musicÂ through headphones (as opposed to amps). Rather than stand, we were askedÂ to get comfy amongst the pillows set up as aÂ semi-circle on the floor in front of the stage. There,Â Ninja Tunes’ finest – Kid Koala, aka EricÂ San, plus fellow musicians Vid and Matt – performed behind turntables, keys, mixing modules, and threeÂ large projection screens. 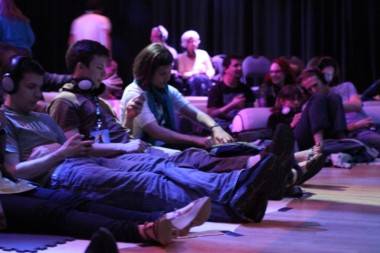 The show didn’t even strictly stick to songs off SpaceÂ Cadet. Instead, the set showcased Kid Koala’s dynamic range of genres andÂ musical projects, from a freestyle turntable solo of “Moon River” pairedÂ with the crooning of a jazz chanteuse to some seriously freaky dub.

And then, when you least expected it – classical piano.Â Sitting down at the stage’s Steinway, San began to play. “Some peopleÂ try to summon Oscar Peterson… I try to summon [Muppet] Rowlf.” 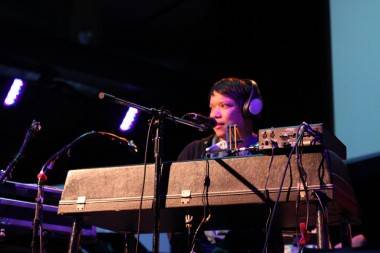 It was these moments of perfectly timed humour, spliced withÂ his musical genius, that ensured the show never suffered a dull moment. From aÂ koala suit-clad San leading the audience in a Yo-Gabba Gabba dance,Â to the “professional” thumb wrestling ring (complete with a slo-mo videoÂ recap with full commentary) to the eight Lord of theÂ Rings Pez dispensers he gave away as participation prizesÂ (people had to play a five-tone tube during the entirety of a song), Kid Koala proved himself to be a consummate entertainer.

A big thanks to the TD International Vancouver Jazz Festival forÂ making this happen, and for treating us to one of theÂ highlights of the this year’s jazz fest. 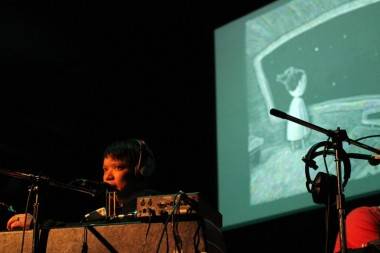