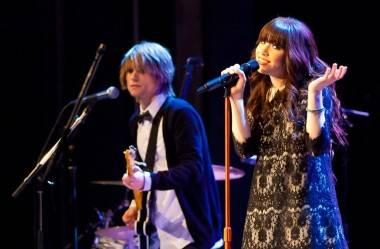 Vancouver singer Carly Rae Jepsen up for a Good Time

Hands up if you’re down to get down tonight!

Now, Owl City has taken quite a critical drubbing for sounding almost exactly like Postal Service. Postal Service is the sideproject of Ben Gibbard of Death Cab for Cutie, you may recall, who had a huge hit with “Such Great Heights” (and deservedly so, in our humble opinion).

Owl City hasn’t come close to achieving the greatness of that song, and they’re not likely to any time in the future. “Good Time”, the group’s new duet with Vancouver singer Carly Rae Jepsen, demonstrates both the band’s strengths and weaknesses.

On the “strong” side, it has a catchy melody. On the “weak” side, it’s almost unbearably twee. One can’t help thinking that Owl City‘s idea of a good time is drinking pop and going for a sundae at the soda shop.

The band is the new The Archies.

Meanwhile, “Call Me Maybe” girl JepsenÂ – who has been endorsed by the likes of no less a personage than Justin BieberÂ himself – has had her squeaky-clean image threatened recently. Photos of a nude lookalike circulated on the Internet and rumours spread that her cell phone had been hacked.

However the singer denied the photos were of her and the controversy has since died down. It just didn’t have legs.

Anyway, here is the new video. We can’t help thinking it looks more like a rave in a Bible camp than an actual good time. But what do we know?