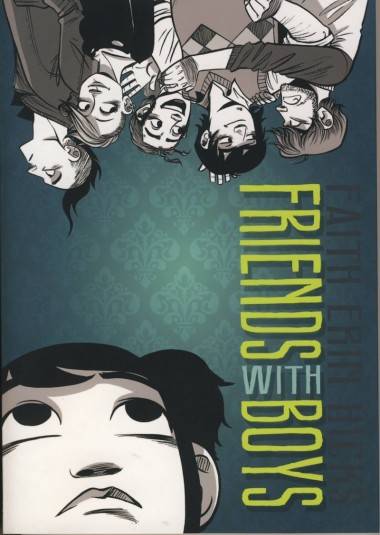 From some preliminary sketches in the back, Friends With Boys (First Second, softcover, 218 pps, CDN$18.50) appears to once have been tentatively titled The Education of Maggie McKay. That title, I think, gives more of a taste of what Faith Erin Hicks‘ new graphic novel is really about.

The Maggie in question is the protagonist of Friends With Boys, but is friends with boys only in the most peripheral way – she’s the only girl of four siblings, so she’s been around guys all her life and is a little unskilled when it comes to befriending other girls.

But friendships with boys aren’t the crux of the story – a more important theme is that, until Grade 9, Maggie was homeschooled by her mom. When Friends With Boys opens, Mom has left the family (the reasons for which are mentioned but never delved into – a nice touch by the author) and Maggie is facing her first day in an actual school.

Hicks, a Halifax-based cartoonist, actually touches on quite a lot in this, her third graphic novel. Hicks incorporates the absent mother and loss, high school culture shock, alienation and Alien (in one of the book’s best sequences, Maggie takes two newfound friends to see the movie in a theatre), the supernatural (there’s a surprisingly effective ghost story subplot), bullying, and probably a few things I’m leaving out. 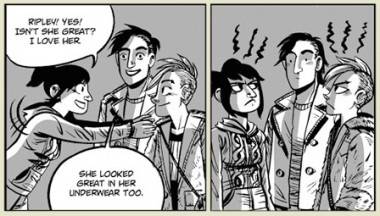 For the most part, and considering the well-trod territory she’s exploring, Hicks mostly avoids clichÃ©, though that’s probably impossible when it comes to high school cliques. Where the cartoonist really excels is in depicting the relationships between Maggie and her brothers, and the brothers – including a pair of twins – amongst themselves. There’s a really funny running gag about how the twins can’t stand each other – or to be apart.

The physical action between the two highlights Hicks’ greatest strengths, which are her expressive anime-influenced cartooning and her timing. She knows exactly how and when to move the action and her characters for maximum humourous effect, and her characters’ facial expressions are always in line with, or complementing, what is going on in the story.

Friends With Boys offers hints that Hicks’ writing is going to catch up with her art soon, if it hasn’t already. And then she’s going to deliver something even more exceptional.