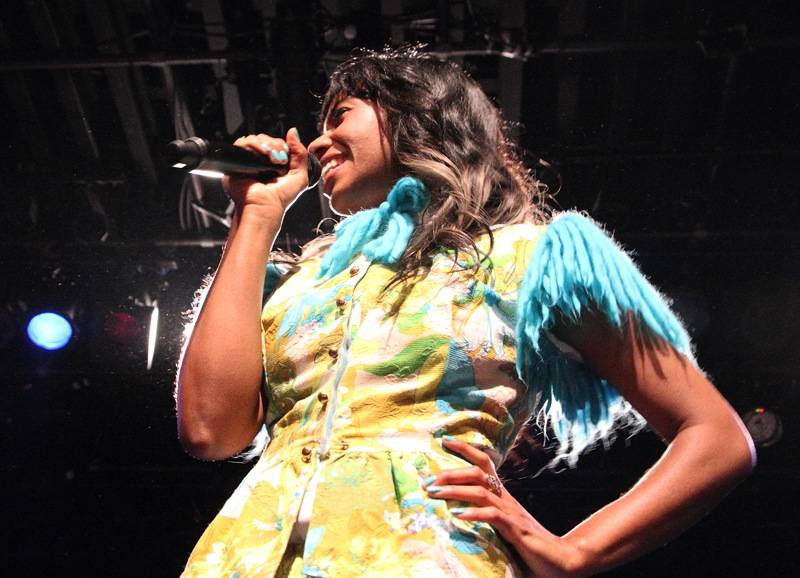 Santigold at the Commodore Ballroom Vancouver May 26 2012. Tamara Lee photo.

From the moment she emerged on Vancouver’s renowned Commodore Ballroom stage, Santigold was very much in charge.

Backed by a three-piece band wearing headdresses that recalledÂ King Tut-era Steve Martin and flanked by a pair of dancers who far cooler than anyone who ever backed upÂ Robert Palmer, the woman born Santi White opened with “Go”, the opening song of her new album Master of My Make-Believe.

I’d not seen a Vancouver crowd this eager, jumpy, or engaged for a long time. And, under the singer’s witchy, dancehall-rock-goddess spell, with bass-levels at a volume I’d call unhealthy, we were immediately reduced to a flock mesmerized by our powerful shepherdess. When she launched into “L.E.S. Artistes”, a single from her debut thatÂ Rolling Stone ranked as the second-best single of 2008, it was the sound of dance music that people will still be dancing to 20 years from now. I couldn’t help but think ofÂ Donna Summer.

Onstage, the steely-eyed Santigold exudedÂ feminine strength while not relying on her sexuality. The focus was on her music and performance and not on her body; there was no need, because she was impressing us with her music.

The two dancers brought their own element to the night with a kind of militaristic uniformity recalling the severe step-dancing in Spike Lee‘s School Daze but with a decidedly comic edge. Sporting sunglasses and zero expressions, the women alternated between clowning around with each other, waving gold pom-poms, and playing drums.

At one point a white horse (two people in mascot gear) trotted onstage before being lassoed into submission in a scene of surreal awe and absurd hilarity on par with any of the Flaming Lips‘ weird stage antics.

Between songs, running her hand through her hair, Santigold let a hint of bashful shyness escape while thanking the enthused crowd. “You are an amazing audience,” she told us, “for real.” She possesses an adorably organic, original quality -Â Etsy super-cool while eschewing anything remotely girly. Santigold could mop the floor with Zooey Deschanel, except that she wouldn’t do that, because Santigold would probably agree that She and Him is actually a really cute alt-country outfit.

By the end of the night SantigoldÂ hand-selects about 30 ecstatic audience members onto the stage to dance behind her while she does her thing. She shares her spotlight and it’s a moment of pure joy, an utter delight to watch. The experience is like a giant wink from the universe, telling us everything will be OK.