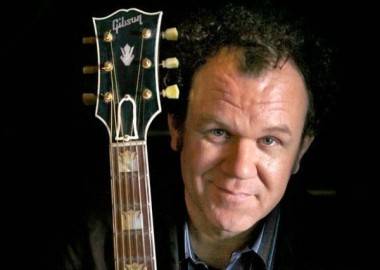 John C. Reilly is best-known as an A-list character movie star. But he’s also a passion-filled musician with a love for traditional Americana.

His remarkably full resume boasts roles ranging from the comic (Walk Hard: The Dewey Cox Story, Step Brothers) to the dramatic (Boogie Nights, Magnolia, Carnage) to the musical (Chicago, A Prairie Home Companion). HisÂ IMDB profile (“homely mug, lumbering gait and unruly mop of curly hair”) reads as though describing a Sasquatch ratherÂ  than an actor known for his trademark qualities of natural ease and an honest-to-goodnessÂ manner.

Signed to Jack White‘s Third Man Records, Reilly is currently performing a limited number of dates with a select group of musician friends as the aptly-named John Reilly and Friends.

“We have been doing little tiny micro-tours,” says Reilly, reached in Los Angeles. “Rather than just packing everyone up on a bus and doing 60 dates in 40 days we’re trying to keep it special. The whole point of the show is that it’s a roots music revue: It’s not like we’re pushing an album or I need to get any more well-known.”

We began our conversation on an amusing note riddled with minor confusion and a flutter of apologies (on my end, of course); having mistakenly given him an incorrect phone number, he was (of course) unable to reach me according to plan.

“That was a creepy experience earlier,” offers Reilly in a voice immediately familiar for its unmistakeable Midwestern earnestness. “I was calling this guy over and over again. Finally he was like, ‘Who are you trying to reach?’ And I was like, ‘Uh… Rachel?’ And he goes, ‘Oh, Rachel passed away six months ago.’Â  And I go, ‘Rachel Fox?’ And he goes, ‘Nah, I’m just messin’ with you, man. It’s a wrong number.’ What a weirdo!”

Rachel Fox:Â So, is music your career back-up?

RF: It certainly is. Tell me a little bit about your “friends.”

JCR: The two featured people in the band that I sing with are Becky Stark, who has a band called Lavender Diamond and she also sings with a band called The Living Sisters. She and I do old classic country songs together, like the old Porter Wagoner/Dolly Parton style of duets with the full band.

Tom Brosseau IÂ  met through mutual friends. We shared a love of a certain kind of close harmony singing, like The Everly Brothers or The Louvin Brothers, The Delmore Brothers. The torch has been passed from one brother duo to another over hundreds of years, actually. That’s what we do. Old traditional folk music. That’s a quieter part of the set.

We also have Willie Watson, who was a founding member of the Old Crow Medicine Show band. He is also an amazing songwriter and singer. 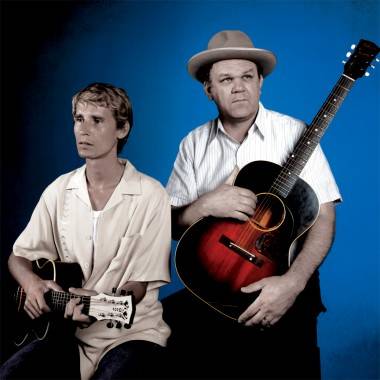 RF: Your band is “John Reilly and Friends.” What happens if they jam and you’re not there?

JCR: It’s just a bunch of friends, I guess.

They don’t really jam when I’m not there, they all have their own side bands. I’m the Chairman of the Board of this group, but it’s a total democracy. It’s an even-steven kinda deal how we work the band, although I do curate the song list.

RF: You’re on Jack White’s label and he produced both your records. He is is one of the more innovative interpreters of traditional American folk music; he’s certainly modernized it in what I think is a really interesting way. What is your musical background?

JCR: I grew up with a player piano in my house. My mom used to sing a lot of old-fashioned Tin Pan Alley songs, she was very into music. My dad was really into Irish traditional music. I did musicals when I was a kid and in high school. As I got older I got really into the blues; I grew up on the South Side of Chicago and blues is a big part of Chicago’s identity, obviously. I learned to play the guitar when I got into college.

Once I started playing music, I had a blues band for a while. But I realized what I was really attracted to was older, and I kept going deeper and deeper into the blues catalog. “Where does this begin, what are the roots of this?” All of a sudden I found myself in the traditional folk world, [music] that came over on ships to the colonies way back when. Music’s been called different things throughout time but really, it’s not about the labels but about the way the music hits you; there is a moral quality in the melodies and old stuff that we play. There’s a reason it’s stuck around.

RF: When you’re in your anthropological search of old music are you finding actual recordings, or is it sheet music?

JCR: A lot of it is old recordings. But once you start playing with someone like Willie Watson, you start stumbling upon stuff that gets caught in memories, through their experience. We all have this music floating around inside us. That’s sort of the theme of the night; music that’s stuck with you. There’s a sincerity and a soulfulness to that. I dunno… it’s kind of refreshing.

Video – The Delmore Brothers, “Blues Stay Away From Me”:

RF: That’s my thinking, listening to you speak. You’re talking about really organic music that you’re playing for people. In this age of electronic everything when people are recording music on their laptops that sounds synthetic; is that part of the reason for the response from your audience? That you’re playing music that is refreshing in its organic-ness?

JCR: Yeah. I think so. Also, people are just happy to see me knowing my film work. It’s a great way to engage. Honestly, modern culture is moving so fast that I struggle to understand where we’re heading, or why it is that certain things are appealing.

But I know what I like. I like it when I can really hear someone’s voice and it hasn’t been processed by a machine. The most interesting thing to me, in music, is harmony. The idea of two voices blending to become this third, magic thing, is something that even when I was a little kid doing musicals, was the closest thing to real magic that human beings could do. [Laughs] That idea of harmony; taking two separate things and creating a third thing that wasn’t there before.

RF: That’s such a lovely sentiment. What do you listen to now vs. when you were younger?

JCR: I was a real omnivore musically, as a kid. A human jukebox. I think a lot of us, through our lives, are trying to find that thing that… it’s hard to explain. [Pauses] You start chasing what you’re interested in, and want to go deeper into it and see where that takes you, and then where that takes you, etc. And what I’m listening to these days is what you hear in the band; old traditional brother acts that sing close harmony, pre-1960s country, and old bluegrass music like The Stanley Brothers.

RF: It sounds like the band has a good inventory. Is there anything that surprised or challenged you insofar as the experience of being in band with other people and traveling?

JCR: I’ve been traveling as an actor, either in theatre or film, for a long time. I knew the challenges going into it.

I was a little nervous when I first started out with this group. I come with a lot of baggage. “Are people going to understand what this is? Are they going to think this is some vanity project?” I had those insecurities going into it but thought finally, “You know what? This isn’t about me, it’s about this music and having a good time with my friends.” Not one of those concerns should be enough to keep me from doing this.

When I first walk out, and people don’t know what it is we’re doing, people scream “Shake and bake!” or “Dewey Cox, I love you!” They have this moment, where it’s like, “There’s this actor that I know from movies, what is he going to do?”

Sometimes people have come to the show thinking it’s going to be an evening of stand-up comedy or something. To me, it’s really about sharing the music and these people who are so amazingly talented with audiences who might not feel inclined to come to the show if [it were just] their names were on the bill.

I’m also surprised with how many people ask us if we wrote all the songs. It’s like, “No, man. We’ve just been mining for gold in the hills of music!”

Clip – Porter Wagoner and Dolly Parton, “Someone I Used to Know”:

RF: I can appreciate your concerns regarding cynicism. Is it something you’ve actually encountered or is it all in your head?

JCR: Any creative enterprise, you can freak yourself out and start to worry about how people are going to judge you, or whatever, but I’ve never been like that. I’ve always been a very optimistic person, from the time I was eight years old when I did my first play. You just go out there and you offer a gift to people. If they want to take it, they take it. If they don’t, well, that’s all right.

RF: That’s a good lesson for everyone, no matter what their pursuit. What can the Vancouver audiences expect from you and your friends?

JCR: Well… you’ll see. [Laughs] Put it this way – if you couldn’t get a ticket, which I highly recommend, to see Jack White, who is playing there across town on the same night – I think you can expect a night of sublime music, a few laughs, and just a good time.

There’s a lot of groups out there playing original, roots-type music. But there aren’t too many eight-person revues that cover as much ground as we do.

RF:Â I saw Lyle Lovett and His Large Band play here last year. That experience of traditional music speaks to a lot of the kind of Americana we’ve been talking about. He blew my mind. I love hearing talented people who can play instruments do so, because I can’t. I’m in awe.

RF: I think I’d be good at playing the spoons. Or, maybe, the washboard…

RF: I got one in a Christmas stocking once. I’ll see if I can find it. Anyways, thanks for your time and my apologies about the mix-up earlier.