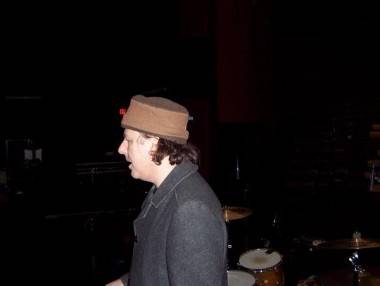 It is with great sadness that we report the death of Todd Simko. The Vancouver musician/producer’s Facebook wall is full of condolences today. We don’t know the details of his passing (nor do we have confirmation other than the news on social media) as of this writing but we belief that Todd passed away some time April 25.

Sometime in the early morning hours of April 26, Todd’s wife Minna posted news of his passing on her Facebook wall. In part, it reads:

“Todd may your soul be finally at peace.

“You are not only the most fantastic father and husband one could have, but also you were also a great friend, musician, teacher, guide, mentor, and music engineer.

“You will never never ever ever be forgotten and your spirit will always live on with all the wonderful lives you have touched.”

A founding member of of the ’90s pop band Pure, Simko had become one of the city’s go-to producers; he’s worked with a who’s-who of Vancouver musicians. (On a personal note, he even offered to help out with my shitty band back in the early ’90s.) Among the artists he worked with: The Salteens, Yoko Casionos, Sean MacDonald, Fanshaw, Kevin House, Paula Toledo, Xavier Rudd, Dandi Wind, Belinda Bruce, Octoberman, Shelley Campbell, The Organ, Marcy Playground, Big John Bates, Young and Sexy, and many, many more (for a more or less complete list of credits visit the ArtistDirect Todd Simko page). In the ’80s, Todd worked at A&B Sound in Vancouver, a breeding ground for many of the local bands that formed in the following decade.

Singer/songwriter Kym Brown, a former Vancouverite now living in London, shared this with us:

“I received the devastating news of Todd’s passing via facebook.

“Todd was an extremely kind, beautiful and caring friend.

“It has been one of life’s greatest blessings to have known and worked with such a uniquely talented, kind and fun spirited individual.

“In the studio he was a natural creative genius.

“There was no ego with Todd. It was all about flowing with the moment and letting the muse do what it would.

“And with a playful spritely manner he deftly steered the motherboard controls like a Nasa scientist.

“The very special memories of work we did together over a decade ago linger palpably as if there has been no passing of time, and I feel that the music itself still sounds timeless to this day.

“Magical gifts from a gifted individual.

“He will be deeply missed by too many.”

Ian Somers, a Vancouver musician whose bands include Brundlefly and, more recently, Love and Mathematics, told us, “Every record he made sounded amazing. He was dedicated to his craft. He always put 110 per cent, as cheesy as that sounds, into everything he did.

“He did a lot of saving records,” Somers noted, two days following Simko’s death. “He’d end up with people’s projects that got out of hand. So often those records would end up in Todd’s hands. He’d polish them up and make them sound great.

“I would say he’s the closest thing I’ve ever had to a mentor,” says Somers. “He knew how to get a good sound out of anything. Another local producer told me Todd possibly has bad taste in gear. But somehow he squeezed amazing sounds out of everything.”

Somers remembers Simko as always being generous with his time. “If I ever had any questions about purchasing a mic or problems with my computer he could solve it. He was always willing to talk. He joked about being my personal tech support. And he did that for a lot of people.

“He was so sharing with his knowledge,” says Somers. “He just knew so much it’s unbelievable. The extent of knowledge and professionalism that guy had, and the fact the remained such a modest success, I just think it’s a testament to how hard it is to do something in the music industry – that someone at that level is still taking on these small jobs.”

Todd Simko leaves behind a wife, Minna, and daughter, Emily.