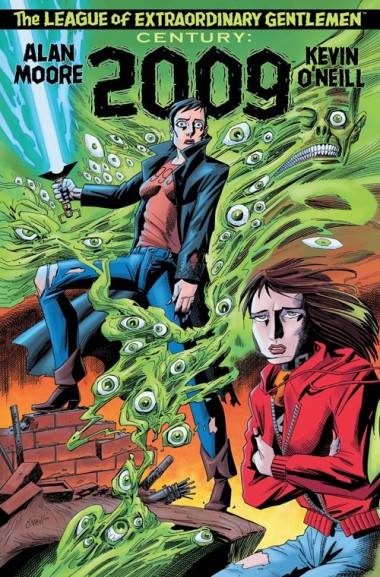 A few months back, Snipe contributor Ryan Ingram noted Century: 2009 as one of the most anticipated comics of 2012.

Well, Top Shelf Productions has announced more details about the book. We already knew it’s the third part of a League of Extraordinary Gentlemen (the title created by Alan Moore and artist Kevin O’Neill using open-source characters like The Invisible Man and Captain Nemo) trilogy that included Century: 1910 and Century: 1969.

Now we also know publication date, size and all that other fun stuff. According to an email from Top Shelf, the book is 80-page softcover that ships in June. Cover price is $9.95US and it can be pre-ordered in the current issue of Diamond Previews.

We’re not sure about you, but we’re looking forward to seeing how Moore incorporates recent history into this fascinating series.

There are some clues in the Top Shelf email: “In this third and final chapter, our narrative draws to its cataclysmic close in London 2009. The magical child whose ominous coming has been foretold for the past hundred years has now been born and has grown up to claim his dreadful heritage. His promised aeon of unending terror can commence, the world can now be ended starting with North London, and there is no League, extraordinary or otherwise, that now stands in his way. The bitter, intractable war of attrition in Q’umar crawls bloodily to its fifth year, away in Kashmir a Sikh terrorist with a now-nuclear-armed submarine wages a holy war against Islam that might push the whole world into atomic holocaust, and in a London mental institution there’s a patient who insists that she has all the answers.”