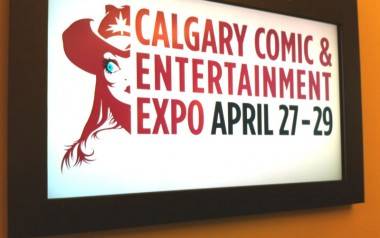 One man’s repressed inner geek surfaces at the Calgary Expo

The first tipoff after entering the BMO Centre that you have in fact made it to the Calgary Comic and Entertainment Expo is that you need both a dictionary and a Miss Manners Guide just to understand what the ticket guy is saying.

“One trusts that it shan’t be folly…” says the kindly beard in the ill-fitting “Volunteer” t-shirt, “… to presume you’ll enter unallayed.”

He’s referring, of course, to the pandemonium encircling me. It’s noon, Saturday, and the crowd is crushing me and my wife, who’s here with me to take pictures. There are 50,000 people expected to attend by the end of the weekend and the fire marshal has already started sending disappointed ticket-holders away. It’s a sad scene: displaced superheroes and disillusioned trekkies shuffle about confusedly – abandoned on this cold, uncaring planet. No trusty crew, no serviceable transporter anywhere to be seen.

Which only makes me feel worse about getting in quite easily. My media pass confers VIP status, giving me access to people who, other than the obvious names like Stan Lee and Patrick Stewart, don’t really mean all that much to me.

You see, as far as geeks go, I’m a bit of a tourist. I was one, back in elementary school, a bona fide social outcast, though more of the “spaz” variety. I’ve been holding out for a Spaz Expo for a long time, but if there was ever going to be one, I’m pretty sure Harper cut it in his last budget.

By the time I got to junior high I learned it was prudent to keep all my Spider-Man fantasies to myself. I shed my geek image, and aspired instead to the masculine ideals of the time, the David Lee Roths, the Mark Messiers. It seemed like the right move 28 years ago. Today, surrounded by these wickedly sexy Cosplay girls, I realize I was born at the wrong time. In my day, anyone foolish to wear a tight Green Lantern costume out of the house was summarily gay-bashed. Talking or acting like Sheldon Lee Cooper was guaranteed suicide.

So as a former-geek and long-time geek sympathizer, it was heartening to see just how happy and confident today’s version seem to be, just how much the identity has evolved.

The first panel I attend is “Geek Speed Dating”. I go there expecting to see a ragtag group of mousy, maladapted lonely-hearts taking turns not talking to each other, awkwardly pitching woo while failing to conceal their twitching.

Not so. The geeks chatter confidently to each other, locked in witty repartee confirming their intelligence. It’s not sympathy that I’m feeling; it’s envy. 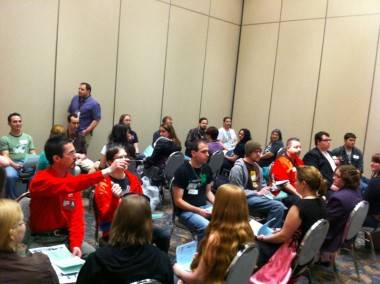 Next, I wander over to an area that’s been cordoned off for people to play board games. The affair is hosted by Club N3rd (www.clubn3rd.com) a Mount Royal University club that was formed with a mandate of “socializing the socially awkward.”

Passerby Jacqui Fraser of Edmonton has been cornered by Calgary’s Shana Froom to join in on a game of Pandemic.

Why Fraser, I ask?

“She was looking at the area and she looked like she knew something about gaming,” says Froom. She goes on to explain that games like Pandemic and King of Tokyo are collaborative in nature, whereas old-school games like Monopoly are divisive.

“Working together helps us strengthen the geek community,” she says. 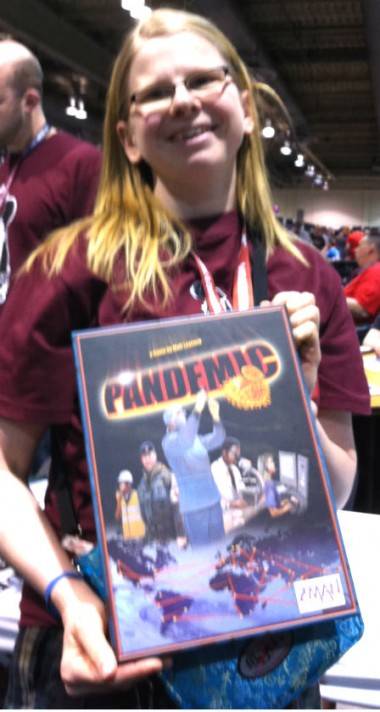 Strengthening the community and helping one another succeed is the principal theme here. I drop into the Canadian Comic Creators panel where Shuster, Harvey and Eisner award-winning artist Pia Guerra is fielding questions from eager aspirants about how to break in.

Down-to-earth and friendly, Guerra is best known for her work as co-creator and lead penciller on the Vertigo title Y: The Last Man series. She seems not to be holding anything back. In an industry that offers no guarantees or security for even the most established artists, she seems happy to help newcomers along.

I ask her if Canadian artists hoping to break into the industry are at any disadvantage when compared to their American counterparts.

“As long as you can make it to an airport, you can be anywhere,” she says. The key, she explains, “is to go to the conventions… San Diego, Emerald City, Wondercon.” She says that artists are incredibly supportive of each other and that she herself had no training beyond high school. 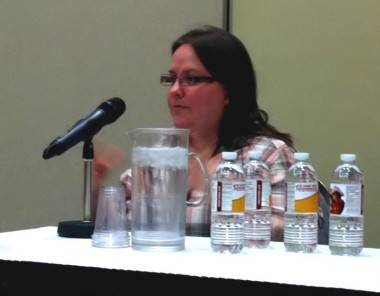 Talent recruiters travel to the festivals and the key is to “find a book that matches what you want to do and contact the editor with samples.” It’s also important, she stresses “not to lose your head” with editors. It’s a small industry and word gets around about who’s easy to work with and who’s not, she cautions.

Though born in the U.S., Guerra lives in Vancouver and says Canadian artists are lucky. Because the work is all contractual, there are no employee benefits. “Here, at least, we have healthcare covered,” she says, while adding that for many of her American colleagues working without benefits is a struggle.

Another thing to consider is that Canadian artists are paid in American dollars, which can be a good or a bad thing, “depending on the exchange rate” she says.

As the day draws to an end, my distinct lack of geekiness has me feeling uncomfortably geeky. I mention this to my wife, who at least has Princess Leia hair, while my fashion is typically nondescript.

Lucky for me, Captain America overhears my confession, and in true heroic fashion, comes to my aid.

“Don’t feel bad,” he says, posing for a picture.

“The straight man is a vital part of the process,” he says.