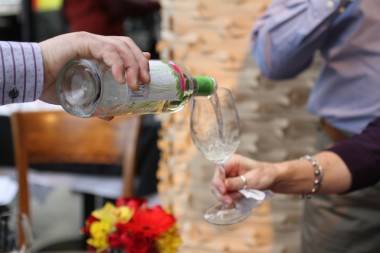 This was our second Vancouver Playhouse International Wine Festival so-called “grazing” event – i.e., move from wine table to wine table while every once in a while returning to the food table.

Like the grazing event we attended last year – New Zealand wines at The Boathouse in Kits, which was happening again at the same time – the Sun and ‘C’ With Spain featured a variety of regional wines, knowledgeable pourers and very tasty morsels (but no sun – the afternoon was typical grey March Vancouver weather).

The wines available for tasting include a few Cavas (Spanish sparkling wine) and a couple of RosÃ©s along with a number of whites (the light and grassy 2010 Botani Moscatel from Jorge Ordonez was a favourite) and reds (Miguel Torres’ rich, full 2009 Celeste had us going back for seconds). Nathalie Bonhomme, a Montreal expat now living in Spain, was one of those aforementioned knowledgeable (and very cheeful) pourers; she was there to share El Petit Bonhomme, an earthy blend of Monastrell, Syrah and Grenache from the Jumilla region. 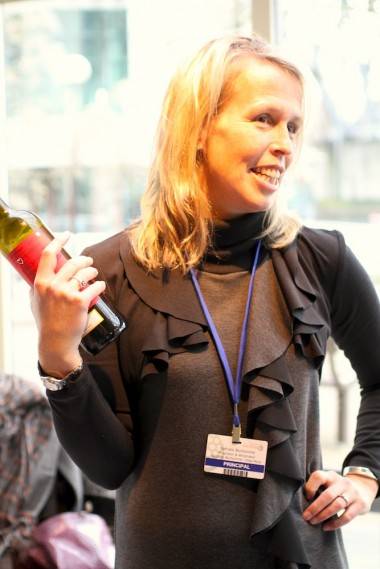 To complement the Spanish varietals, including Tempranillo and Monastrell, the C kitchen had prepared some brunch-type dishes – chorizo potatoes with quail’s egg, mini eggs Benedict served on a brioche with shaved Iberico ham and saffron Hollandaise, risotto balls with saffron and a pistachio dip, smoked salmon-wrapped cream cheese, along with a blue cheese and hazelnut fig salad and brisket meatballs with a rustic tomato sauce. 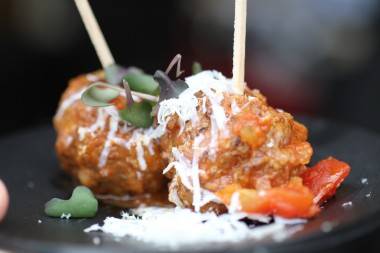 Although we got in as media, we decided that the price – $69 a ticket, which includes as much wine and food as you can consume in two hours early on a Saturday afternoon – seems reasonable. Especially if you can have a nice long nap afterwards, or another bottle of Spanish wine – or both.