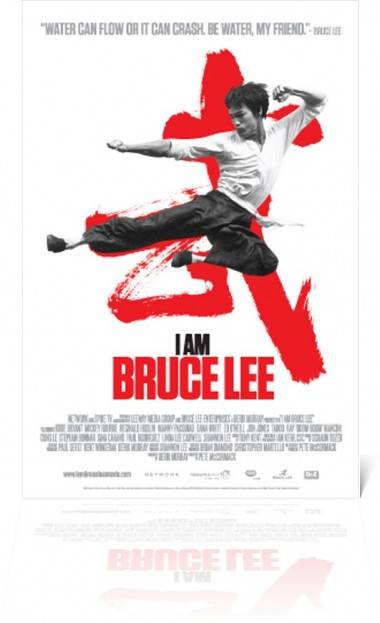 I Am Bruce Lee opens March 8.

Review – I Am Bruce Lee

“Bruce’s by-word was ‘quality.’ It was what he only wanted for us, and himself.”

So saidÂ Linda Lee Cadwell, the widow of legendary martial artist Bruce Lee. The iconic actor, athlete and philosopher, who died tragically at theÂ  young age of 33, is the subject of a new documentary, I Am Bruce Lee.

At the film’s premier in Vancouver on Feb 8, Cadwell spoke with the audience about why she and her daughter, Shannon, were so enthusiastic about giving their blessing and time to Vancouver-based filmmaker Pete McCormack. No stranger to the sports biography, McCormack directed theÂ award-winningÂ Facing Ali (2009), which told the story of another legendary figure and was even shortlisted for Oscar consideration. 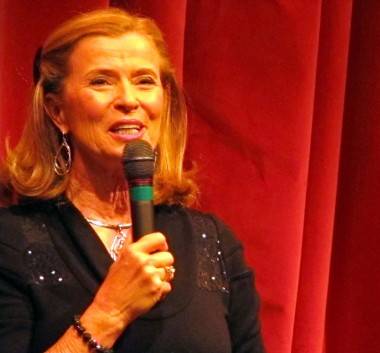 Linda Lee Cadwell, Bruce Lee's widow, addresses the audience at the premier of 'I Am Bruce Lee' in Vancouver. Rachel Fox photo.

I Am Bruce Lee traces the origins of the soul-searching athlete of the title back to his beginnings in Hong Kong, where he was a child movie star. The son of a famous Chinese opera singer, Lee’s youth was complicated by race – his mother was half-white. Being seen as a “minority” was one of several factors that informed a difficult adolescence, leading him towards street-fighting at an early age. At 18 he moved back to the U.S. (he was born in San Francisco) to explore other avenues of success. 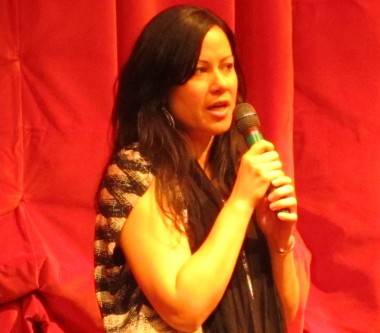 It was there he met his future wife, Linda, and began the journey that would lead him to expand upon and ultimately re-define popular martial arts. A charismatic bravado marked by a graceful “swagger style”Â  pushed all kinds of racial, cultural, and social boundaries in the late 1960s, when Lee starred as Kato on the popular TV series The Green Hornet. His groundbreaking influence can’t be overstated; as one commentator says of him in the film, “he put balls on Chinese men.”

The film itself is a compelling, fun watch that doesn’t demand past exposure to Lee or his persona in order to enjoy it. At times I Am Bruce Lee plays as something that is made for a television audience; it is heavy on punchy music and fast edits. Words being spoken by various commentators frequently appear on screen as they are being said, which I found gimmicky, redundant, and distracting over the course of the movie. 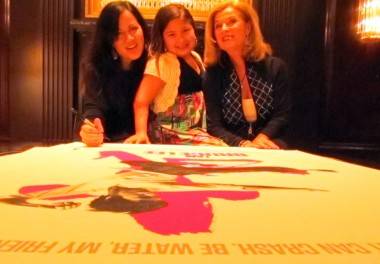 Three generations of the Lee family signing movie posters at the Hotel Vancouver.

A veritable love-fest, I Am Bruce Lee features interviews with those people who knew him closely and worked with him professionally as well as those who count themselves among his legions of fans, including celebrities like actor Mickey Rourke, athletes Kobe Bryant, Ray “Boom Boom” Mancini, Gina Carano, musician Taboo (The Black-Eyed Peas). At times, the famous interviewees detract from the focus of the film. Though it may be relevant to hear actor Ed O’Neill talk about how Lee influenced his own pursuit of martial arts, footage of the actor receiving a black belt seemed out of place.

The only other times I found my interest wane were when the various streams and classical styles of martial arts were explored in long sequences. 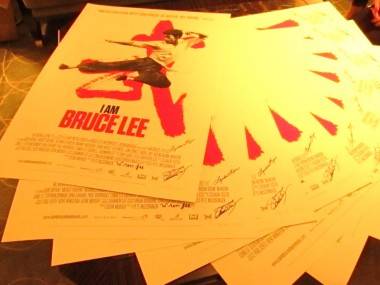 More impressive was the overall portrait of a man who fought to break through Hollywood’s racial restraints. “He hated the oppression of ‘the little people’,” said Cadwell after the screening. Archived interview footage of Lee articulating various philosophies in his own words were mesmerizing, his candor, humour, intelligence and charm as fresh in 2012 as in the 1960s.

I Am Bruce Lee never delves too deeply into Lee’s personal life, avoiding the nasty “death rumours” that have plagued his family and sullied his legacy since his untimely death in 1973. The inevitable end of his life looms large over the film and is tackled by McCormack with a great deal of thought and respect. Of course, the most emotional moments were those in which his wife, daughter, and close friends spoke of both the enormous void he left and the many gifts he gave. Though definitely not a sad film, one can’t help but leave the theater without lamenting the tragedy of his loss and wondering about what could have been.

I Am Bruce Lee is currently screening in select cities across the U.S., is opening in select Canadian cities on March 8 and 17, and in Australia and New Zealand throughout March and April. For detailed release information, check the official website.

The Snipe News has one (unsigned) poster to give away to one lucky reader. What’s your favourite Bruce Lee movie? Leave a comment below to enter. Winner will be selected at random. Contest closes on Wednesday, March 14.

One response to “Bruce Lee’s legacy”