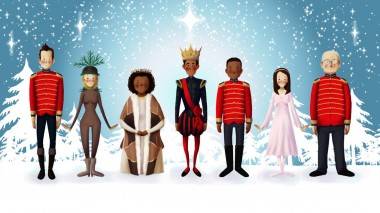 The fanbase ofÂ Community has carved out a reputation as a creatively passionate bunch, to put it mildly.

In the wake of NBC unexpectedly pulling the quirky cult comedyÂ from the network’s chedule last year, fans protested in faux-goateed flash mobs, swarmed Twitter witha battlecry for six seasons and a movie, and left over 30,000 comments on a single review for the series’ last-aired episode.

Yet, as passionate and creative as the fans of the cult NBC comedy are, Julieta Colas still stands with the most inspired, creative fans. Although if you ask her,she’ll likely say she’s just a huge nerd with some free time.

The 24 year-old from Mexico has been creating an impressive tribute to theshow in a seemingly never-ending output of fan-art.

Since Community’s first season, Colas – who is currently attending Vancouver Film School’s Classical Animation program -Â has created a series of keychains, a diorama, mash-up comics, and much more. 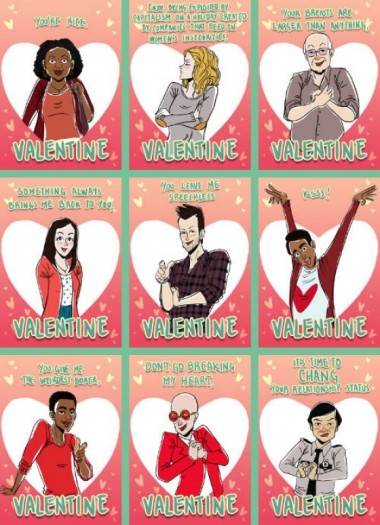 “I used to be the type of person [that thought] drawing other people’s characters was lame, but I just fell in love with the show and the characters,” says Colas, meeting in downtown Vancouver on a recent Sunday. “Even now, I draw all day at school, and when I get home, all I want to do is keep drawing. Only, instead of school-work it’s [show characters] Jeff, and Britta, and Annie and everyone else, doing crazy stuff.

The balance between working on her fan-art projects and schoolwork hit a slight bump during a recent live-nude drawing session at school, where she started working on some ideas for a series of Valentine’s Day cards featuring the show’s cast.
After posting them online, the cards quickly went viral, appearing on Vulture, among other sites. The set of images is nearing almost 8,000 notes on her Tumblr page, and she’s accrued a slew of new admirers on Twitter.

The icing on the cake came two weeks ago, when Colas flew down to Los Angeles to attend the cast and crew’s appearance at the annual TV event Paley Fest. She debated whether or not to go, but now says it was totally worth it.

During the panel, she got an unexpected shout-out from showrunner Dan Harmon and actress Gillian Jacobs, who took a moment to ask where “@jujujulieta” (her Twitter handle) was sitting.

“I got the feeling that people around me hated me for standing up and beingso loud,” says Colas, who hollered back from her balcony seat. But she loved every moment of her the visit, from getting chance after the panelÂ to meet the folks behind her favorite show to hanging out with new friends as equally as obsessed with all things Greendale Community College as she is.

The aftereffects of Paley Fest haven’t totally worn off, either.

“My first thought was, now I can tell my brother to suck it, for making fun of me for liking the show,” she says. “Then I thought, did this really happen? …But when I got to Vancouver, I just finally freaked. I started flailing around. Before that, I was trying to keep it cool.”

Although she’s been following the show since day one, and has been doing fan art since halfway through the first season, she admits there was one scary moment in particular where she realized how deep her obsession ran.

She was in her home in Monterrey, Mexico – a city surrounded by the violence of the ongoing drug war – when an intruder broke into her house and threatened her and her family, just after she had finished watching the second season’s Christmas episode.
In the adrenaline-charged moments after her father and brother took the would-be thief down and the police arrived, one of her first thoughts was, “Oh My God! What if he had broken in fifteen minutes earlier?” she recalls today. “While the show was still on? I’m pretty should I would have been like ‘Excuse me, I’m watching the Christmas Special of my TV show. Could you wait ’til it’s over?’

“When I like something, I’m like a horse with blinders on. I’ve had other obsessions, but nothing as strong as with this show.”

Colas says that part of what inspires her about the show is its boundary-pushing creativity, and cites her three favorite episodes, including “Modern Warfare”, in which Community’s Greendale campus turns into a paintball-filled dystopia; “Paradigms of the Human Memory” which turns the sitcom standby clip-show on its head; and, more recently, “Remedial Chaos Theory”, which cleverly explores seven different alternate timelines. 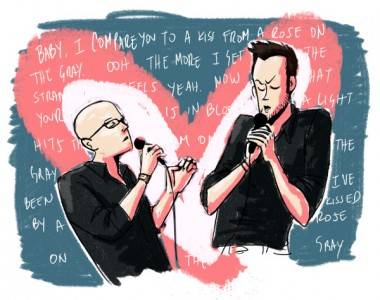 She also loves the show for the character Jeff Winger, played by Joel McHale asÂ the series’ anti-hero and extremely reluctant leader.

“I’ve always loved the anti-hero,” says Colas. “The asshole with the heart of gold. But that character is usually relegated to a secondary position, at least in the shows I’ve watched. So with Jeff, it’s like ‘Yes! It’s everything I ever wanted!’”Â McHale’s character is also the hardest for her to draw.

With new episodes of Community starting to air tonight (March 15), the Vancouver-based artist will have no problem keeping busy. And one of her next pieces of fan art will be shown at PixelDrip Gallery in Los Angeles, for a Community-themed show that will also feature thelikes of Rob Schrab, Jim Mahfood and Sam Spratt.