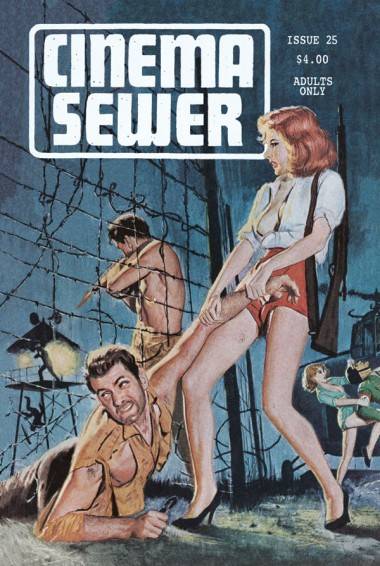 Cinema Sewer is also a series of books from English publisher FAB Press. Three sick volumes, which collect pieces from the magazine as well as new material, have been published so far.

We emailed the Vancouver writer/artistÂ  a few questions to find out more about the two books. Here’s what he had to say:

Shawn Conner: What can you tell us about the cover art and artist of the new Cinema Sewer?

Robin Bougie: Absolutely nothing! The artist is a mystery, in fact. I found the illustration quite by chance in a dusty ol’ men’s adventure magazine from the early ‘ 60s, and took a liking to it. I’ve done quite a bit of research about the artists who worked for these magazines, but this uncredited artist I don’t recognize and neither does the author of a recent book about men’s adventure pulps. I was kinda hoping someone out there might see the cover and let me know. I love that the armed lady resistance forces are on a Nazi-prison rescue mission in high heels. Ridiculous.

Who I can tell you about is the cover artist for my other new publication this week, Sleazy Slice. Comic artist Jim Rugg did that one, and he is one of my favourite working American commercial artists these days, so I was really proud to get to commission that piece from him. He’s also done an amazing step-by-step blog post this week about his process of creating the art, so let your readers know that they should go have a look at that:Â http://jimrugg.com/2012/02/sleazy-slice-5-cover/ 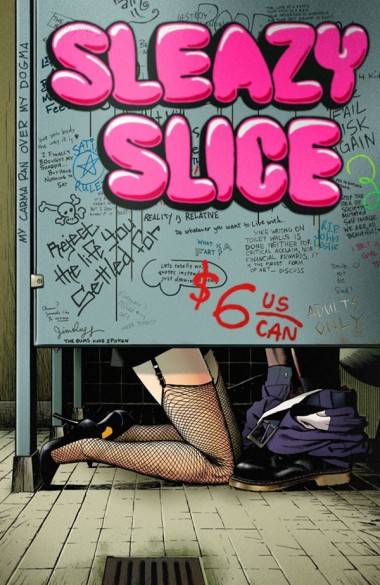 RB: The lead-in section is an 11-page trash retrospective called “Camp Atrocities: Nazi Exploitation and Death Camp Horrors”, and it was written by UK cult film historian David Hinds. Really proud to have that in there. Another very talented contributor from England who has all kinds of work in this new issue is Ben Newman, and I’m totally giddy to get to work with him again. He’s fucking brilliant.

Former Vancouverite Robert Dayton and New York’s Ian Jane are the two other cats you’ll find work from in issue #25. The rest is drawn and written by yours truly. The article of mine I’m most excited about is called “Breakneck Thrills: Incredible Daredevil Documentaries!”, and it’s all about 1970s documentaries focusing on Evil Knievel, Ken Carter, and other insane guys with muttonchops and little fear of death.

SC: Is the new Sleazy Slice all your work or does it have contributors as well?

RB: It has a 30-page story by Maxine Frank and myself about two giant 20-story naked women who duke it out Godzilla-style in the streets of Vancouver’s Mount Pleasant ‘hood. That was fun to do, and we set it there because coffee shops near Main and Broadway is where we get together every Wednesday to draw comics together. Need to draw a building getting destroyed? Just look out the window! haha!

RB: I have yet to be able to get either of those comics, because they keep selling out whenever local stores like Lucky’s get them in. I’d love to check them out and see what the fuss is, and I must say that they sound great.

I will say this, however: Despite featuring lots of very talented indie artists, and even alt-comics golden boys like Josh Simmons, Sleazy Slice has yet to catch on with the art-comics crowd the way those anthologies seem to have. I think it’s because there is absolutely NO irony in Sleazy Slice. These artists don’t pretend that they are better than the subject matter that they exploit. We don’t feel that we have to apologize for it, and we often don’t even feel the need to subvert it. Parody can be fun, but it isn’t a must, nor is a wink and a nod to let the audience know you’re in on the joke – these are just good old fashioned DIRTY COMICS, filled with sex, violence, and zero redeeming qualities.

Look, I just make a product that I would like to buy, which probably explains why it sells so poorly! Haha, oh well. Gotta keep going, because when you stop swimming, you drown.