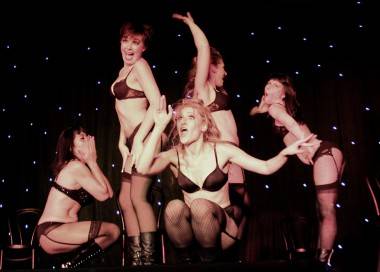 The 2012 Naughty But Nice Show in Vancouver

First off, let me just say that I am a total prude.

Second off, let me just say that this was not my first venture to the Taboo… Naughty but Nice trade show at the Vancouver Convention Centre.Â  So maybe I’m not such a prude after all.

That being said, for the vast majority of people, sex is a pretty private experience, one we appreciate with our own peccadilloes and proclivities. Fortunately, those who work in the sex toy industry recognize that. That, and that everybody’s anus is different so it makes sense to have a really wide variety of dildonic devices for people to choose from.

Taboo’s producers have done a good job, since my last visit, of making the venue more atmospheric. The place is pretty dim and the decor tries to evoke a “sexy” environment – as long as dimness in convention centres crammed with people is your thing. Personally, I found it a little odd. It was a bit like the marketplace at the PNE but with penis-shaped cakes for sale instead of mini donuts and silicone vaginas to stick your finger into instead of those nifty Dr. Ho’s electro-massgers. (For what it’s worth I stuck my finger in a vajillion silicone vaginas that day. Unreal.)

I enjoyed walking around taking in all the mismatched-looking couples, wondering what they looked like naked and what their “thing” was. 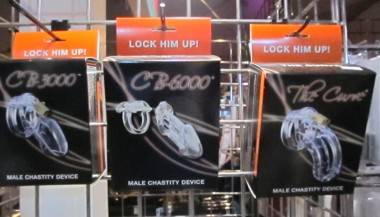 Yes, they exist. He can wear them all the time and urinate, though an erection is rendered impossible. If worn correctly, one can manage to avoid a fungal infection. Rachel Fox photo.

I enjoyed looking at the booths. I took in the demonstrations of contraptions that lovers could tie each other to and in. One of these included serious-looking pronged metal hooks; the round part of the hook to be inserted in nasal, anal, or vaginal openings and the other side to be attached to a rope or some other securing… device. After I was done visualizing the horrifically cinematic scene wherein I am having to explain my injuries to an unsympathetic gynecologist, I happened upon a booth, Lovebumper, selling ergonomically engineered sex-furniture (because God knows after you’re done with all the crazy shit, you may need some specially engineered memory-foam to support your lower back in just the right way in order to experience truly deep penetration). The man from that booth, Chris, was explaining how he began designing the furniture to address the needs of clients who had spinal injuries or other mobility issues. While anyone can have a great time on the ergonomic sex furniture, it actually was borne from a very real place of quiet, honest necessity. And for some reason that made me smile.

I enjoyed my time trying on a corset at the Lace Embrace Atelier booth. As a child who was forever watching Masterpiece Theatre and found my heart quicken during Merchant Ivory films, it would be something of a given that I would simply have to try one on. Before I can live the bodice-ripping romp of my dreams I must first procure a bodice! The properly-boned, locally-made garments are constructed to the same constrictive designs of the historical garments they echo. Mine was of the over-the-breast variety, and while I did feel my breath escape even before my assistant started to pull and tighten, I must confess that I found the experience to be rather thrilling. Once on it was actually comfortable, like a brace for someone with slack posture, zero core-strength, and a fantastic pair of ta-tas.

I also enjoyed talking with some of the vendors. One fellow was selling stainless steel, medical grade devices that I thought looked like kitchen tools. He walked me through the device that delivers the electric shocks (“Is this a retrofitted hand-blender?”) with various different attachments (“Is that pinwheel thing for edging pies?”). He showed me a metal vise-looking thing meant for “C.B.T.” 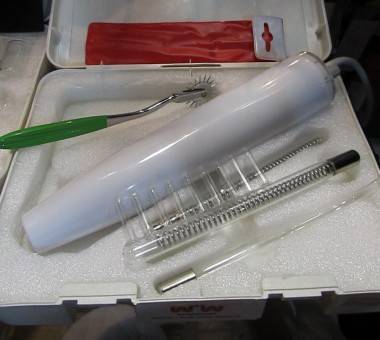 That is not a retrofitted hand blender and nothing in this photo has anything to do with baking. Rachel Fox photo. 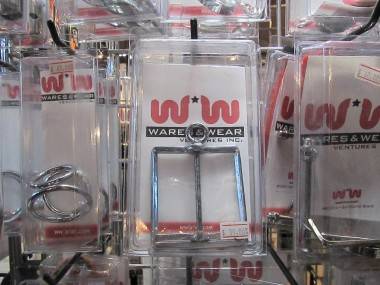 “So, not Cognitive Behavioural Therapy?” I asked. 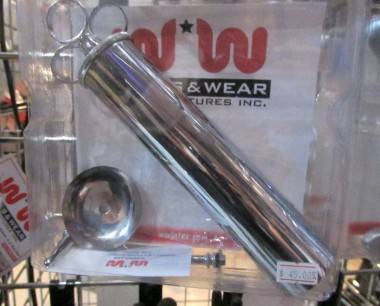 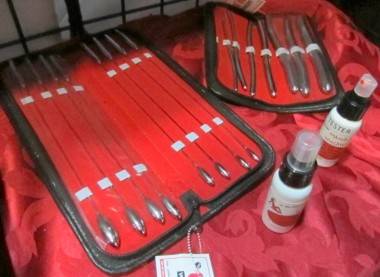 Urethra Franklin! These are the perfect gift for the David Cronenberg fan in your life who has everything. Rachel Fox photo

I did not enjoy walking through the dungeon room, which was basically a large tent housing demonstrations. I observed a mostly-naked woman wearing a rubber gas mask, intricately tied up to pentagram-shaped pommel-horse contraption where a man (who resembled Stephen King) in a kilt repeatedly struck her immobilized buttocks. Mostly, I didn’t like the dungeon room because I kept running into vile clouds of fart everywhere I walked. Secondly, I didn’t appreciate the mocking, uncouth, poorly-worded English of the pimply drunk frat boys whose conversation I found ruinously distracting. Holy mood killer, Batman.

I did not make any purchases, mostly because I thought that any time I pulled out said purchase I’d be reminded of where I got it. Nothing sexy about that.