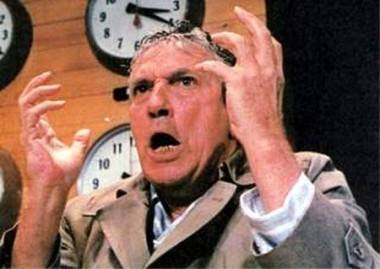 Mad as hell and not going to take it anymore - Howard Beale in the 1976 movie Network.

No more movies at the Rio

The Rio Theatre has lots its battle with the Province of BC Liquor Control Board to serve alcohol while serving as a multi-purpose facility that also screens movies. As as a result, tomorrow, Sun Jan 21 2012, will be the East Broadway theatre’s last day of screenings, including a showing of the 1976 public protest movie Network.

Although the theatre has been granted a liquor license, on Thurs Jan 19 the Liquor Control and Licensing Board informed theatre owner Corinne Lea that the provincial regulatory body will enforce a condition on the terms of the Rio’s liquor license that states:

A letter sent by the LCLB in response to an email from Leah Claire, a member of the Rio Theatre Facebook group, stated that: “Historically by law, British Columbia has not permitted movie theatres to hold a liquor primary licence and serve liquor. This has been due to concerns about these facilities being attractive to minors and the challenges in determining who is consuming liquor in a dark theatre… We are mandated to ensure that minors do not have access to liquor.”

However, as Mackenzie Gray points out on the Rio Theatre Facebook page, “Then why can you buy booze at Canucks games and B.C. Lions games and Vancouver Whitecaps games? Minors are present at those events.” And Lea points out that the LCLB statement does not explain why the theatre can’t simply show movies while not serving alcohol.

The theatre will screen Network at 4:30 p.m. (regularly scheduled screenings of Girl With the Dragon Tattoo will follow at 6:30 and 9:30 p.m.) Admission is five dollars. Lea has also planned a celebration of the granting of the liquor license, a celebration she says will be “bittersweet” due to the conditions placed on it.

To find out more, visit the event’s Facebook page here.