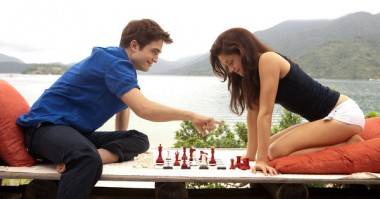 – The Descendents, a much-hyped early Oscar contender, opens in theatres on Friday. George Clooney (who vies with only Leonardo DiCaprio and Jim Carey in their transparent desperation to win an Academy Award) stars as a man emotionally adrift from his family. In hopes of rekindling a relationship, he does what many have before him: he takes his begrudging daughters on a trip, the idea being that somehow geographical distance will pave the way for some kind of miraculous understanding.

The roadsie has become a familiar trope for Descendants director Alexander Payne. Sideways, About Schmidt, even his short contribution to Paris, je t’aime, and now The Descendents all see their lead characters hitting the open road to either find what has been missing in their lives, or to better understand this emptiness they have created. All the above films met with both critical and commercial success (his contribution to Paris, je t’aime was hands-down the best thing about the anthology), so I suppose, if it ain’t broke, don’t fix it.

One does occasionally long, however, for the smirky, tongue-in-cheek Payne of old. The man who brought us Citizen Ruth and Election, along with their characters: discovering themselves not on the run, but rather in the trenches of their frustratingly permanent environments.

– Speaking of long journeys, Madonna, the seemingly invincible one, has resurfaced, back behind the camera for a second spin as director of W.E. The film juxtaposes two romances from different eras: Kind Edward VIII and Wallis Simpson, along with a modern-day Manhattan couple. Madonna’s first outing, 2008’s Filth and Wisdom, made less a splash than a trickle, so here’s hoping the game Abbie Cornish can spark the Material Girl’s sophomore effort. Madonna’s Q&A from the BFI’s London Film Festival.

– It doesn’t seem possible that it was only three years ago that the Twilight series first hit theatres. I suppose that is a backhanded compliment in the sense that the franchise feels like its been around far longer, albeit in an eye-rolling, “Oh, here we go again” fashion. I have not seen a single frame of the Twilight series, so other than stating the already widely known release date of this Friday, I have little to add outside of the series’ good taste in filming locations. Vancouver, the Hollywood film producer’s land of plenty, has played host to all but the first Twilight film. And while the franchise piles up all the MTV and Teen Choice Awards it can (typically a sign of abject horridness), I’m all for gainfully employing some of the hardest working and best crew found anywhere in the world, a few of whom I count as personal friends.

– A grand huzzah to the Hollywood Foreign Press Association for seeing the glorious opportunity they had in front of them. Honestly, who will not tune in to see Ricky Gervais host the otherwise dreary Golden Globes this upcoming awards season? And equally, to see which A-listers will have the “flu” and be unable to attend. Gervais was considered merciless last year with his ripping of several major stars, along with their lackluster films. Hollywood, a town and industry that relies heavily on everyone knowing everything about its sparkly inhabitants for its continued prominence, seemed stunned that its already well known dirty laundry was being hung out to dry in televised form. Here’s hoping Ricky will begin next year’s telecast with, ”Now, where was I…?”