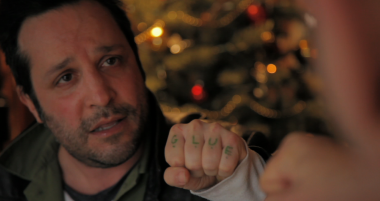 As Vancouver-based actor Ben Ratner introduces himself to me at the start of our interview, he quietly yet effectively manages to assert himself as simultaneously sensitive and something of a veteran. “I’m going to speak extra slowly since you’re recording,” he said. (Slowly.) “I’m not on lithium right now.”

A familiar face on the Canadian independent film landscape, the Leo-award winning actor (Mount Pleasant) and director (Moving Malcolm, in which he worked with the late John Neville) is gaining notice for his portrayal of Jerry, a man in the middle of a schizophrenic break, in director Carl Bessai‘s Sisters&Brothers.

Set for a Canadian release in the spring of 2012, the large ensemble also features Gabrielle Miller (Corner Gas, Call Me Fitz)Â  as Jerry’s devoted sister Louise, tasked with the familial responsibility of helping Jerry cope with and manage his disease. Sisters&Brothers is the third in Bessai’s largely improvised trilogy (Mothers&Daughters and Fathers&Sons; both feature Ratner) and premiered at the Toronto International Film Festival, screened at the Vancouver International Film Festival and recently opened Toronto’s mental health-themed Rendezvous with Madness Festival.

Rachel Fox: You’ve worked with director Carl Bessai, who is known for working very organically with his actors, several times. Can you talk a little about the process on this film?

Ben Ratner: The way I work with Carl is, I throw as much stuff as I can at him and let him shape it and guide it. I came to the table with a lot of ideas but things changed and we worked on it for the better.

I had a conversation with a friend about the character, and though I had researched schizophrenia he asked, “Well, who was this guy before the mental illness took over his life?” And that was a key idea for me; not playing a mental illness but playing a person. Once I knew who this person was the manifestations of his illness became much more apparent. So, much of the storytelling and the behaviour in the film came out of that. Once that character had been created with research and collaboration, the really interesting thing was working with the doctor Carl consults with and going through my list of all the behaviours of this character and all the things he does in the storyline; checking everything off. It was very satisfying. There’s so many different kinds of schizophrenia with various behaviours and challenges.

RF: You did due diligence insofar as staying true to a real person rather than a caricature.

BR: In my family I have a sister who is quite severely autistic. My mother is part of a group for mothers with children with challenges of various kinds; some of her closest friends are women who have schizophrenic children. Certainly, I didn’t want to be offensive or untrue with anything I brought to it. I also read a book called, After Her Brain Broke which was written by a friend of my mom’s [Susan Inman] about her schizophrenic daughter. For sure, any actor wants to make it as real and true as possible. But the movie isn’t all about this guy, so you can only spend so much time in the details of things. 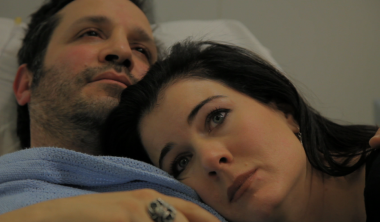 Ben Ratner, Gabrielle Miller in a scene from "Sisters&Brothers."

RF: It must have been challenging then, to find a balance between portraying something that is authentic but still entertaining that is in keeping with the overall tone of the film.

BR: Of course, we wanted to make it entertaining and enjoyable to watch. That was the great challenge as we were shooting it. Carl was very concerned, and kept saying, “This just isn’t very funny.” And it wasn’t. I was having a really hard time trying to adjust it to being lighter and more humorous because it just didn’t feel authentic to this character… you know there could be other characters that could have a lightness to them.

I’m not sure exactly what Peter Sellers’ character had in the film Being There, but that was a film that had such a whimsy and a lightness with a character who was in his own world mentally. But schizophrenia will not have that lightness – it’s a really torturous disease. To try to make it funny just isn’t truthful. These poor people are inundated with terrifying images and sounds and feelings constantly, so there’s not too much humour in that. I guess the funny thing is how they try to overcome it and try to deal with it. I know Gabe [actress Gabrielle Miller] had a really hard time trying to make it funny and it was torturous to have to deal with this character! Thank God we only shot for four or five days. It wasn’t a lot of fun at the time, unlike Fathers&Sons where we just laughed for the whole shoot. This film was quite like being in a dysfunctional family for 15 hours a day for a few days.

RF: There definitely is a balance there; Jerry’s condition and his life is juxtaposed with a fair amount of irreverence. The storyline roots for comedy within his personal tragedy.

BR: That comes from the ensemble, and from my end, I do have an understanding of that – from having an autistic sister. Although she will require care for the rest of her life, she certainly has enlightened everyone in her life just through her innocence and her honesty. It can be hilarious, too. You roll with the punches, you know? 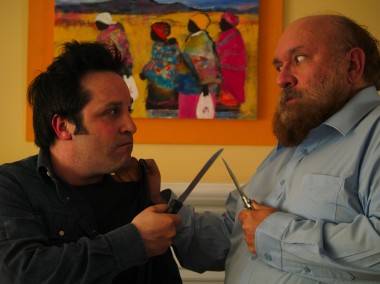 Ratner, left, in a scene from "Fathers&Sons."

RF: There’s no happy ending for Jerry and Louise, is there?

BR: Thank God it doesn’t have a happy resolution. When we shot it we did do a couple of different takes and I really didn’t want to do them because it ended up feeling totally inauthentic. As it happened Carl found a better resolution which read like, “It’s not gonna be easy but she’s gonna hang in there with him.

RF: What, if anything did you learn from playing this character? Did it change you?

BR: That’s an excellent question. Part of what you do [in working with Carl] is these interview sequences – we shoot the narratives, the multi-character scenes, and then after that we shoot the interviews where we sit down individually and Carl interviews us in character.Â  There was a lot of feelings and ideas that came up for me that would not have had we not already shot the other scenes; one of which was a deep sense of vulnerability and shame about my behaviour. I knew everything I had done and put the other characters through and how disturbed they were by me. I felt really kind of, ashamed about that, and very… regretful about some of the things I had done.

So that became very real, about how difficult it must be for people with schizophrenia to know that they’re unwillingly causing so much harm and so much hurt to people they love and people who love them. And, just a sense of exhaustion; I did it for four or five days and to live that way all the time. What a burden that must be, to carry that intensity of feeling non-stop. I am sure that some of the medication takes away some of that suffering but it just creates other challenges. I was just exhausted and my voice was thrashed from all the yelling and screaming. I just felt really remorseful about the pain I had inflicted upon the people around me. So that made it very real, for sure. I really understood how these people just can’t “turn it off”. That was a big one. 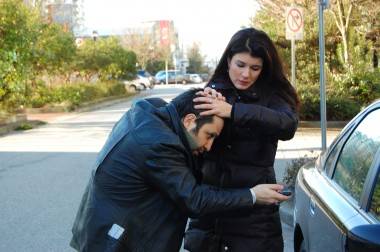 Louise helps Jerry into a car in "Sisters&Brothers."

RF: What resonated the most with me after the film involved your storyline and, specifically, the very physical nature of the way you and Gabrielle Miller played off of each other. I liked watching that and related to it, the way your character who were clearly at odds were also free enough to invade each others personal space.Â  That was a great display of intimacy. Did you plan that? 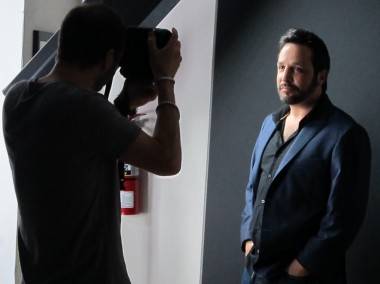 RF: Would you play a character with mental illness again?

BR: I’d love to do it again; I feel like I’m just starting to understand it. I’ve played characters with addiction issues and an autistic character before. This is the first time playing a full out schizophrenic in the middle of a break. There’s one moment in the film where I talk about what a sister means to me [in the interview sequence]. When I look at that I feel like that’s the truest, clearest thing I’ve ever done on film. It was a real truthful, clear, uninflected moment.

I think those things are like a light at the end of a tunnel; you take on a challenging character and it can be tumultuous and dark and you can make a lot of mistake and there can be a lot of obstacles but hopefully you come out with a little bit of clarity. I feel like I did that on this one. I came out with some clarity and I’d like to try and do this again; start from this place and go into it with more clarity. I’d welcome that challenge.