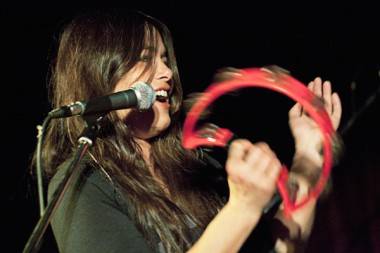 – review and photos by Issha Marie

“I want people to have the best sex ever to this song,” Rachael Yamagata said Tuesday night, when introducing “Stick Around”.

The song, off the New York based singer’s latest album Chesapeake, wasn’t the only highlight of the evening. Opening with “Even If I Don’t”, the first track off Chesapeake, the Arlington, VA-raised singer played more songs from the new record as well as tracks from her 2004 debut Happenstance and, much to this fan’s delight, some of my favourites from 2008’s Elephants… Teeth Sinking Into Heart, her previous record. I may even have brushed a tear or two when she performed “Elephants” (much thanks to the lovely young lady beside me who requested she perform it).

I should also mention Yamagata’s four-piece band, which was amazing. Mike Viola, who played keys and back-up guitar with the singer, doubled up as opening act as well. The bass was seductive, guttural and surprisingly prominent (just the way I like it) and the drums were lively. And Yamagata’s vocals are even better live than on recordings.

“Stick around,” Yamagata sings in her sexy-time song. “I’ll be good to you”. She certainly held true to her word in Vancouver.