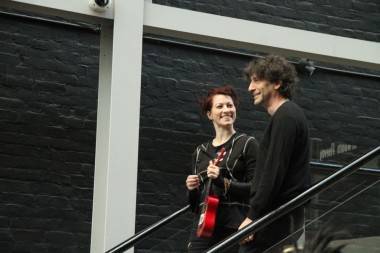 Neil Gaiman and Amanda Palmer performed for nearly an hour Sunday afternoon at the John Fluevog shoe store in Gastown in Vancouver.

Arranged by Greg, a store employee who apparently knows Palmer from when he used to work at a Boston Fluevog outelt, the gig came a few hours before the performing duo (who are married) were scheduled to play the Vogue Theatre. Palmer calls these semi-impromptu (they announced this one on Twitter the night before) shows “ninja gigs”; this was, she said, Gaiman’s first. 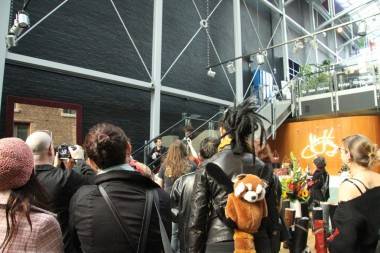 He certainly acquitted himself like an old pro. In front of well over 100 people who turned up at the shoe store, the two seemed perfectly relaxed as they took up a position on the stairwell leading up to the mezzanine. Palmer, who has toured and recorded with her bands Dresden Dolls and Evelyn Evelyn, sang a number of songs on her ukulele while Gaiman, a fantasy author with a huge and loyal following, read some (very) short stories and a poem. One audience member, a boy of about 12, wore a mask based on the stylized gas-mask worn by The Sandman, the Vertigo comics character Gaiman is famous for writing.

From an iPad, Gaiman read his allegorical short “Babycakes”, a 100-word Christmas story, and a poem about killer saints. He also sang the dark blues song “Psycho” (which has also been covered by Elvis Costello), and he and Palmer opened the show trading tongue-in-cheek verse of “Makin’ Whoopee” (also a mainstay of their current touring show). Palmer’s solo songs included a cover of Radiohead‘s “Creep” (we hope to post a video of her performance of the song in the next couple of days). The two also answered questions from the audience, including one about the Occupy movement (Palmer has been stopping at the protest camp in each city on the tour), and another about their marriage (they like it!). 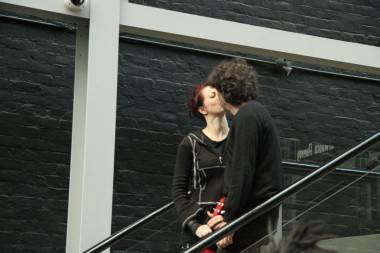 Gaiman and Palmer were last seen headed towards Occupy Vancouver, with many dozens of followers in tow.

More photos from Neil Gaiman and Amanda Palmer at Fluevog Shoes in Vancouver: