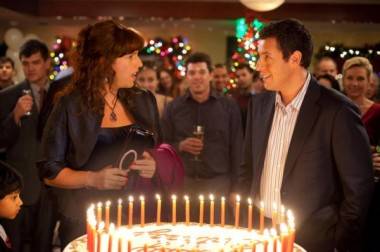 On trial – is Jack and Jill the year’s worst movie?

If nothing else, Jack and Jill – the new Adam Sandler comedy – is inspiring some truly funny writing on the part of North American movie critics. “Picture Tootsie if everyone in the cast had a head injury. That’s Jack and Jill,” writes Drew McWeeny on Hitfix.

McWeeny also writes, “It is amazing, and probably a sign of my ability to sublimate rage on an epic scale, that I am still in love with movies in general and this industry in specific while still understanding that someone got paid to come up with that as a movie.”

In Time, Mary Pols says, “More than 24 hours has passed since I watched the new Adam Sandler movie… and I am still dead inside. It made me feel as if comedy itself were a dirty thing, mainly practiced by people eager to express ugly feelings toward everyone from homely women to Mexican immigrants.”

The movie, directed by Dennis Dugan, concerns twins, a brother and a sister, both played by Sandler. The plot hinges on whether the male Sandler character, a successful ad executive living in a beautiful home in L.A. with a beautiful wife (Katie Holmes) and two adorable children can snag Al Pacino (the real Al Pacino) into doing a commercial for Dunkin’ Donuts. Egregious product placement and wasting one of the major acting talents of our times are two of the crimes with which Jack and Jill is accused.

Tom Long of the Detroit News writes, “The apocalypse starts here.” Kevin Carr of 7M Pictures says, “Not since The Love Guru have I seen a film that was such an lazy, unfunny, utter failure in entertainment of all forms.” Mike McGranaghan of Aisle Seat: “Howard the Duck, Gigli, Showgirls, From Justin To Kelly. What do they all have in common? They’re all widely considered to be among the worst big studio movies ever made. You know what else they have in common? They’re all better than Jack and Jill.” Ouch!

So is there a positive review out there? Sort of; as Doris Toumarkine of Film Journal International generously puts it, “Adam Sandler playing both an ambitious ad guy and his loser female twin is a brazen high concept that provides mostly comedic lows. But Sandler fans may welcome the brainless diversion.”

Jack and Jill, a day after its Nov 11 opening, stood at a 3 per cent approval rating on the critics aggregate site Rotten Tomatoes. It’s closest competition this year might be Season of the Witch, a Nicolas Cage medieval period piece released at the beginning of 2011, which is at 10 per cent.