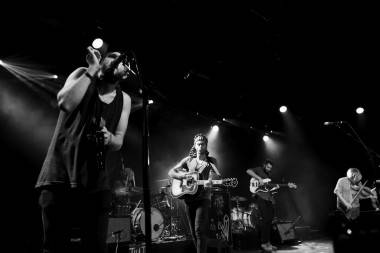 – by Ria Nevada/photos by Shannyn Higgins

It was a cozy and toasty affair at last night’s sold-out Head and the Heart show in Vancouver. The Commodore Ballroom was crammed with bright-eyed undergrads who could clearly relate to the charmingly optimistic notions of the band’s self-titled debut.

The record harkens back to the basics of ’60s folk-pop, rooting itself on a solid rhythm and string section and round vocal harmonies. Although the group is comprised of nomads from various cities in the U.S., they managed to find each other through regular open mics in Seattle and eventually sat down together to create the strong and cohesive sound that they have today.

From their opener “Ghosts” to the final number of their encore, “Down in the Valley”, the flawless interlacing of guitarists/vocalists Jonathan Russell and Josiah Johnson‘s simple melody lines, paired with Kenny Hensley‘s jaunty keyboards, created a solid base to their music.

Tyler Williams on drums and Chris Zasche on bass added a bursting pulse, pun very much intended. But Charity Rose Thielen could, and should be regarded as the Head and the Heart’s secret weapon. She brought a poignancy to their music through her violin embellishments, and completely stole the show with her heart-wrenching, jazzy vocals on tracks like “Winter Song”. 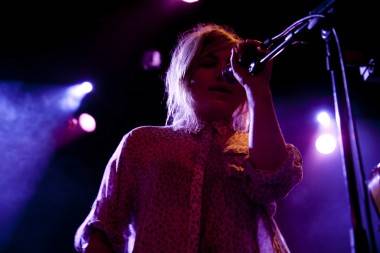 Charity Rose Thielen with The Head and the Heart at the Commodore, Ballroom, Vancouver, Oct 20 2011. Shannyn Higgins photo

There is a strong artistic bond between the band, but underneath it all, just a solid friendship. The group often smiled at each other encouragingly, and often sang into the same microphone, joking nudging each other. They even invited openers Thao and the Get Down Stay Down and Lemolo to join them on a hearty rendition of “Lost in My Mind”. If last night’s line-up was anything to go by, I’d say that the age of grunge has been totally eclipsed in Seattle.

The Head and the Heart’s founding members Russell and Johnson talked with me pre-show about the newer and happier breed of artists that seem to be emerging in the Pacific Northwest and the secret to the group’s undeniable chemistry. 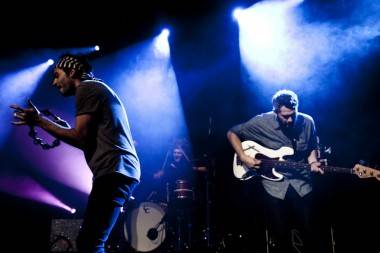 The Head and the Heart at the Commodore Ballroom, Oct 20 2011. Shannyn Higgins photo

Ria Nevada: Living in Seattle, have you found that there’s a common thread or bond between bands from the Pacific Northwest?

Jonathan Russell: I think so. I think a lot has to do with honestly watching them perform on stage. They seem to be a little more open and just like smiley and almost borderline cheesy?

Whereas growing up in the East Coast is the total opposite and everyone’s too cool for school, like you don’t really interact with the crowd. I feel like most bands that come out of Seattle at least are just happy!

I don’t what it is, which is funny because grunge came from there, which is on the opposite end of the spectrum, but right now, something about their presence and their openness. And clothing, obviously, you can tell. The flannels…

JR: Yup. Here I am. [points at the Cowichan sweater he is currently wearing]

RN: And when did you guys know that you had something special, something tasty on your hands?

JJ: Jon and I were the first ones in the band to meet, for a while, and we didn’t immediately rush out and try and find a band…

RN: You had a little bromance?

JR: Totally. We courted each other. Like the gentlemen we are.

JR: We were just remembering this the other day. I had songs and he had songs, and since neither of us is really great at other instruments other than playing acoustic guitar, like he’s pretty good at piano, but he wouldn’t really consider himself a piano player.

JR:Â No. You just build me up then break me down.

JJ: But anyways, when we were playing on each others’ songs, we didn’t really have a way to accompany each other with our instruments. And so, we were like, “I like your songs but how do I add something to them?” And it ended up just being the harmonies that we sing over them. But there was a weird period where we were just frustrated.

I remember a practice that we had where we just trying to add different things, and it just wasn’t jiving. I remember meeting Kenny, our piano player, and he just has this bouncy, poppy Beatles sounding piano thing going on. And that was like this whole other dimension to what we had been doing. So we started writing songs as a…

JJ: That’s the word. But we just kind of kept playing these songs that we’d write at open mics and people started reacting to them more than we anticipated. Because for us, it was just really fun and yeah, we wanted to be in a band, but we didn’t think of it like that yet. 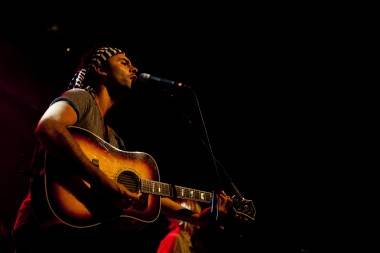 Head and the Heart at the Commodore Ballroom. Shannyn Higgins photo

JRB I don’t know if this would be the strangest but this one definitely was entertaining in a strange way. It was this, she had to be mid-’70s, old lady sitting down reading poetry. I can’t remember if it was provocative, but it had sexual overtones. But she was like 75, and frail, and obviously eccentrically dressed. She’s surrounded by 22-year-olds, like a hipster-bar, cafe thing. You would imagine her being like a cat lady.

JJ: She had no qualms about that and people respected her for it.

JR:Â This lady was just like, I don’t know, somehow just super confident! Or maybe completely falling off the rocker, no pun intended.

JJ: But yeah, seeing her come into an open mic with a bunch of twentysomethings and actually have them start to pay attention was…

JR: People would shut up and listen! It was amazing!

RN: Were there any pivotal moments or personal milestones that inspired the emotions we hear on the record?

JR: I think the fact that we all moved to the same city on a whim. None of us knew each other before this band except for Tyler and I, our drummer. But just the fact that all of us had uprooted and moved and were looking for change. We’re just going through this like “Hey I’m in my early to mid 20’s and kinda homesick, and I don’t know what the future holds, but I’m willing to try”.

JR: Exactly. You could feel it through all of us. Everyone wanted to go somewhere and had that drive amidst the whole “Who knows what’s gonna happen? I’m in this new place?”, that uncertainty.

RN: So do you think that’s something defines our generation?

JJ: I think a lot of people play it safe too often. Not so much as maybe 50 years ago, but even if their dream job isn’t working as an accountant, that’s what they do because they feel like that’s what they have to do? Like if they didn’t have that steady income they wouldn’t be able to handle themselves.

JR: And that’s exactly what we were thinking about when “Ghosts” was written.Â  Just like, all my friends were talking about leaving, and everyone had these plans to go, and none of them moved. Which is fine!

JJ: Like for a lot of people, it’s just a nice idea. But more people should do this! You would be so much more fulfilled if you take chances and potentially fail, or do fail, but then pick yourself and make something out of it.

RN: Yep, well look at you guys. I think for most musicians out there, signing with Sub Pop is the ideal, and you guys are there! So how does that feel?

JJ: It feels pretty good. I remember when we first signed with them, they were like, here’s the storeroom, and all the records from the bands we work with and I was looking down the list and it was favourite band after favourite band. And then you go in a year later, and you’re like, “Oh my record’s in there!” It’s a pretty crazy thing.

JR: I feel like we’re pulling one over them. How did we get away with it?

RN: Oh you don’t give yourself enough credit! Well good luck with the show tonight, and we’ll catch you there! 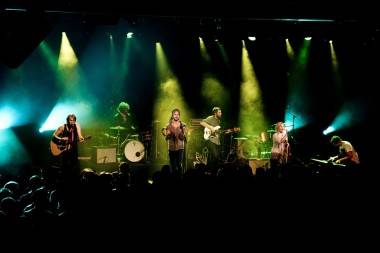 The Head and the Heart at the Commodore Ballroom, Oct 20 2011. Shannyn Higgins photo.

Photos – Head and the Heart at the Commodore Ballroom, Vancouver:

One response to “The Head and the Heart”