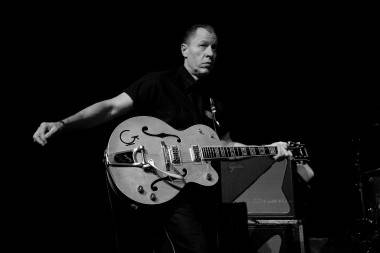 – by Ria Nevada/photos by Jason Statler

Reverend Horton Heat and Nashville Pussy put on quite the circus at the Commodore Ballroom on Wednesday night. Both high-octane bands shared a legacy of twentieth century American rock ‘n’ roll with their polite and demure Northern neighbours, but Vancouverites threw decorum and composure out the window for the ol’ Reverend, revelling in the diabolical themes of his music.

The bar was packed with punk rockers, head bangers, bikers and pin-up girls doubling up on drinks even before the show started. The early beer-slinging got the dance floor dangerously slippery by the time Nashville Pussy began their set. The crowd slid around to the country-metal jams from the Atlanta outfit, and eventually moshed to the head-banging “Snake Eyes”. 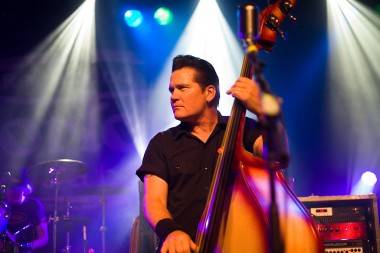 Guitarist Ruyter Suys evoked Twisted Sister‘s Dee Snyder with her curly blonde mane, but her voluminous hair didn’t distract from her mad skills and magnetic stage presence. The woman owned that stage, sliding from one end to another on “Hate and Whiskey” and ending the show by literally pulling the strings out of her guitar and slapping her ass before jetting off.

Blaine Cartwright on vocals, dressed in worn denim, sleeves trimmed from his black T-shirt and sporting a handlebar moustache, perfected the part of a working-class rock star. Bassist Karen Cuda‘s jagged bangs only accentuated her edgy vibe. Nashville Pussy had the look and more importantly, the sound of authentic Southern hair-rock down pat.

Waiting for Reverend Horton Heat (stage name for lead vocalist and guitarist Jim Heath) to go on, the riled-up audience kept themselves occupied by grabbing another round of drinks (or three) and starting a sing-a-long to the filler playlist. After screaming out every word to Johnny Cash‘s “Folsom Prison Blues”, the crowd erupted in cheers to the bugle introduction that signalled the Rev’s entrance.

A Latin riff from Jimbo Wallace‘s sunburst upright bass guitar wafted in the smoke-filled air on the opener “Marijuana” (a nod to B.C.’s most popular crop). Styled head to toe in black with slick back hair, the Rev’s facial expression was cool and composed as his fingers moved frantically all over his guitar on his swirling solos.

They continued to play songs from every record they’ve ever released in their 25-year career, in chronological order. Fans jived to the ’50s surf-rock “Baby, You Know Who” from the ’90 LP Smoke ‘Em If You Got ‘Em. The Reverend sounded every bit as crisp and charming live, as he did two decades ago. Everyone squealed with glee for “Nurture My Pig” from the sophomore record The Full Custom Gospel Sounds of the Reverend Horton Heat.

Next up, they pulled out “Cruisin’ for a Bruisin'” from the vault, a maniacal track that they hadn’t performed live in 10 years. Unfortunately, I missed half of it after one drunk and over-excited fan reeled back and puked on my leg. Things only got messier from there in the crowd, but on stage, every note, every bass slap and drum solo and was clean and pristine. 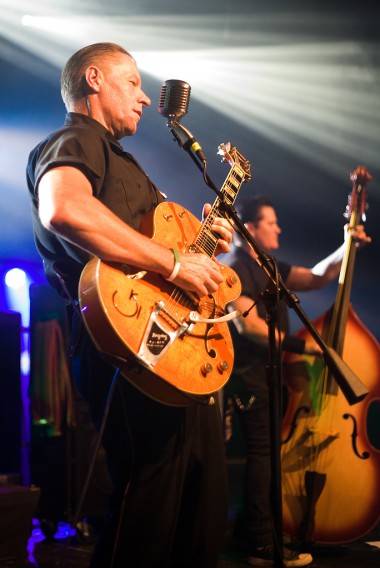 The pace of the show slowed down once on the sweet, swaying tune “Crooked Cigarette”. But all hell broke loose on “The Jimbo Song”, an adulterated version of the childhood classic “B-I-N-G-O” that showcased Wallace’s insanely intricate bass lines. I thought the craziness might be over after the band played four songs from their latest release Laughin’ and Cryin’ With the Reverend Horton Heat, but Rev decided to forsake the summer season and play the Christmas tune “Run Run Rudolph”.

Sensing that the crowd was not ready to leave, Reverend Horton Heat played a few more classics before taking the caravan to Nelson. Overall, it was a raucous and thoroughly amusing show – well worth the hangover. And the damage to my jeans.