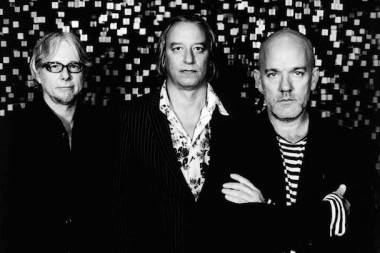 This morning, REM announced that the band is splitting up. They did so gracefully, without fanfare; a class act all the way.

The group formed in Athens, GA, in 1980. An EP and a debut, Murmur, launched the quartet’s career. For five or six (depending on who you ask) albums, “the only band that mutters” – so-dubbed because of singer Michael’s Stipe‘s pronunciation and a spin on the phrase, once attributed to The Clash, “the only band that matters” – could do no wrong.

Following Murmur, REM released Reckoning, Fables of the Reconstruction, Lifes Rich Pageant, Document, Green, Out of Time and Automatic for the People. It was an astonishing run that would be the envy of any rock band. But the band took a bit of a tumble with 1994’s “rock” album, Monster, and never quite recovered. Drummer Bill Berry quit after one more album, New Adventures in Hi-Fi. The four that followed were received with varying degrees of acceptance, though it was generally agreed that the final two, Accelerate (2008) and Collapse Into Now (2011), captured a little of the old magic.

Anyway, enough of our editorializing. REM touched a lot of people in myriad ways, whether through live performances or on record. Here’s what a few people had to say about the band.

Sabrina Anne Modder: “Being depressed in high school and listening to ‘Night Swimming’ [Automatic For the People, 1992] on repeat.”

Robyn Hanson: “August 2003 at Thunderbird Stadium… REM was day one of a two-day back-to-back concert… not a festival but it would have been marketed as one now. Dandy Warhols and Stephen Malkmus opened… then when REM went on stage, Michael Stipe was giving shout-outs to different Vancouver neighbourhoods/businesses. ‘This song goes out to the Opus Hotel. This song goes out to Burnaby.’ as they had just finished recording their new album in Vancouver then. Later on in the show during their encore they brought Thom Yorke up on stage to sing ‘E-Bow the Letter’. The following day Radiohead brought Michael Stipe on stage during their encore to sing the “this is what you get” for ‘Karma Police’… oh, and what made that first REM concert at Thunderbird so magical was the fact that Mars was as close to Earth as it would ever be in a million years… and it was one of those gorgeous summer evenings with a long pink sunset.. and Mars glowing brightly. I even think Michael Stipe dedicated a song to Mars.

“A year later while waiting for a server to greet us at the Opus’ now-defunct Elixir restaurant, I stood at the entrance staring into the restaurant, glaring into oblivious, clearly unimpressed by the long wait… not realizing I was gazing in the direction of Michael Stipe and all of REM who were all sitting down enjoying their brunch. Michael Stipe looked up and our eyes met and I quickly had to look away as, well… I really didn’t intend to do so!”

Natasha Thirsk of the Vancouver band Catlow: “Playing a show [at Vancouver club Richard’s on Richards] with the Dirtmitts (my old band) opening up for the Minus 5 and REM playing a surprise set afterwards. Michael Stipe thanking us for opening on stage and backstage Peter Buck asking me… ‘…what the heck kinda chords are you playing?’. ha.”

Siobhan Kelly: “Back in 2003 when recording in Vancouver they use to go to Allegro Cafe where my husband was working as a cook. He called me up and told me REM was there and [porn star] Traci Lords but not together. I hightailed it down there and ended up drinking with [bassist] Mike Mills until 4 in the morning. Talking about fishing and how I must check out the Mission District in Sanfran. (I was heading there that summer). My husband on the other hand while working in the kitchen kept doing cigarette runs for the rest of the band and got a 20 buck tip each time. I guess they smoked a lot. He met Stipe but I didn’t as when I arrived he was leaving and was out front talking on his cell. A few years later I saw them the same weekend as Radiohead at Thunderbird “best gigs ever” still remember the audience standing still as the band stopped because we were all watching the Canadian geese fly over the audience.”

@arianecdesign: “I met them back in ’83 at Universal Amphitheater. Band signed my ticket. Michael had his gramma visiting him backstage!”

@thestonepines: buying their album monster when I was a kid and listening to it over and over in my ripped baggy jeans

@missripley: front row seats on the monster tour. Amazing show. Listened obsessively to them throughout my adolescence.

@PeeSeeGee: my first ever concert was on Monster tour. Played with Spearhead (been around a while), Cranberries and Belly. Epic lineup.

@thomashartnett: REM were the first band i fell in love with. Automatic for the People was the first CD I ever bought!

Paul Duchart: “I sent Michael Stipe a couple of 8+10’s of him in concert that I took when they were recording an album at the Warehouse a few years ago. The next day one of the photos was delivered to my front door with a personalized autograph!”