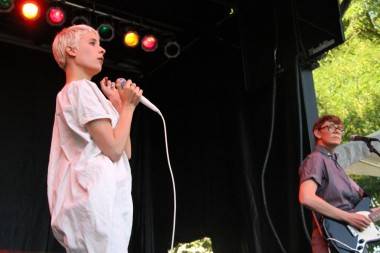 The last day of Bumbershoot was as gorgeous and sunny as the rest. Hall & Oates (or “Daryl Hall and John Oates” as the program has it) headlined the Mainstage at the Key Arena, while Reverend Horton Heat capped the evening off at the Fisher Green Stage. We were finally able to catch some comedy, and one of the shows in the KEXP Music Lounge, which features some of the event’s most buzzed-about performers in a more intimate theatre setting.

Charles Bradley – Though Wikipedia claims he is “commonly referred to” as the Screaming Eagle of Soul, I personally had not heard of Bradley. But the Brooklyn-raised 63-year-old, backed by young, mostly white 5-piece band, stunned us all with his raw, emotional torrent of a delivery on tracks like “Why Is It So Hard” and the title track to his album No Time for Dreaming. 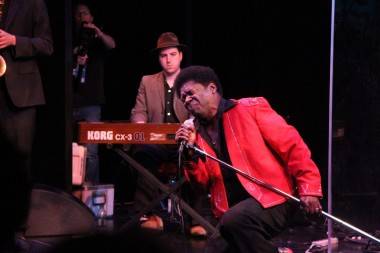 Head Like a Kite – Head Like a Kite is Seattleite Dave Einmo and various collaborators. For the first part of his set on the outdoor Fisher Green Stage, Einmo wore a white Elvis-style jumpsuit, played guitar and sang along with a drummer, but by mid-set someone in a panda costume and a guest vocalist had joined him onstage. The tunes were fun, crunchy dance-rock numbers played to a not-huge early-afternoon audience. 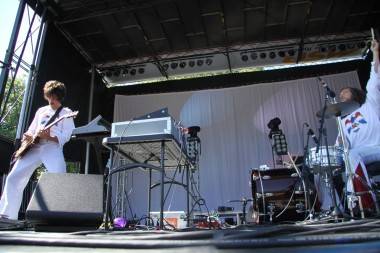 Head Like a Kite at Bumbershoot, Sept 5 2011. Robyn Hanson photo

Yacht – A revelation. Everything I’d heard (and seen – check out our great live Yacht photos) about the Portland band’s show turned out to be true – lead singer Claire L. Evans, of the short platinum-dyed tresses, is can’t-take-your-eyes-off-her performer, with a sense of humour; her main co-hort Jona Bechtolt is a bundle of energy himself, and together they worked the audience at the outdoor Fountain Lawn Stage into a swooning, dancing mass. Their New Wave-inspired songs – the band covered the B-52s’ “Mesopotamia” – are smart and catchy as well. See them (the band plays the Electric Owl in Vancouver Sept 7 and the NW Music Fest in Portland Sept 10). 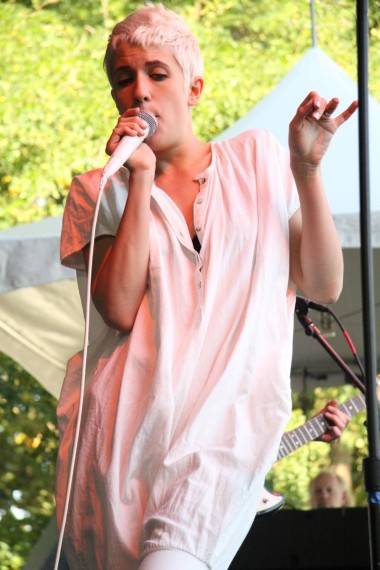 Comedy Bang Bang – Scott Aukerman hosts a comedy podcast called Comedy Bang Bang which basically involves Aukerman, a comedy writer and producer, joking around with friends. For the third and last Bumbershoot version, Aukerman’s guests included fellow podcaster Doug Benson (Doug Loves Movies) as well as Paul F Tompkins who appeared in character as “the Cake Boss”, or just “Cakeboss” and Andy Daly, who came as the lecherous showbiz vet Don Dimelo. Most of the show seemed unscripted, and since it’s just a bunch of guys riffing back and forth it has its peaks and valleys for sure; I heard more peaks though, especially from Tompkins and Daly, who are pretty comfortable in their roles. Benson more or less sat out the last portion of the show as Aukerman lobbed set-ups at the other two.

Fitz & the Tantrums – This L.A.-based soul/pop act put on a hugely entertaining show on the Mainstage. It’s singer Michael Fitzpatrick’s band, but he shares the spotlight with co-vocalist Noelle Scaggs and a vintage organ (as well as five other musicians). Scaggs and Fitzpatrick have an electric onstage chemistry and Scaggs was especially effective at getting the crowd shouting along to “Dear Mr. President”; another highlight was their rocking rendition of the Raconteurs’ “Steady As She Goes”.

Watch – Fitz & the Tantrums, “Steady As She Goes” (live in Amsterdam):

Phantogram – The dream-pop duo capped the night at the Fountain Lawn Stage with suitably evening-ish sounds. Like School of Seven Bells, Phantogram distill the best parts of My Bloody Valentine (girl vocals, lush guitars, pop melodies) into their own post-MBV thing (people must really, really miss the British band). I really don’t know what else to say about this set except that, uhm, I enjoyed it from where we sat sipping our wine in the beer garden. 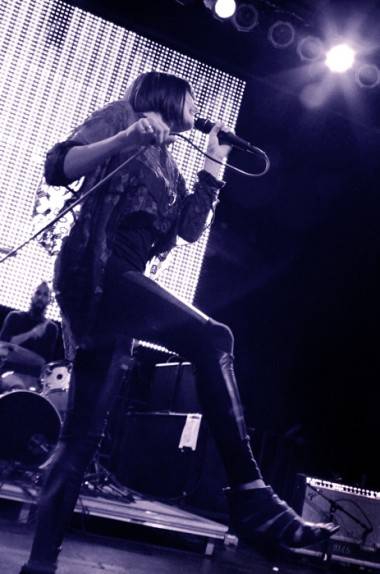 Hall & Oates – There’s more to the long-running blue-eyed soul act then their ’80s MTV hits (“Kiss On My List”, “Private Eyes”, “I Can’t Go For That (No Can Do)”) or even their early ’70s AM radio staples (“Rich Girl”, “She’s Gone”). The duo made a couple of ace albums in between, including 1979’s X-Static; I was hoping to hear at least one track from one of these records, and they didn’t disappoint. Oates (vulnerable-looking without the famed ‘stache) took the lead vocals for “How Does It Feel to Be Back” from 1980’s Voices, a bombastic number which my girlfriend thought sounded like Bon Jovi but which I was happy to hear again after all these years. That was four songs in, after Hall, Oates and their band opened with “Maneater”, “Out of Touch” and their cover of Mike Oldfield’s “Family Man”. I’m sure the rest of the set was just as hit-filled, but we had a long drive back to Vancouver, and not even the prospect of hearing “Wait For Me” (off X-Static) was enough to keep us in our seats. 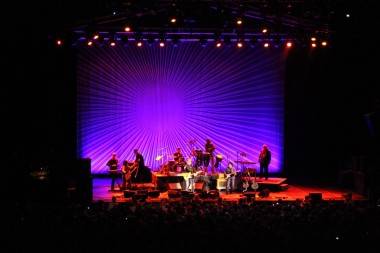