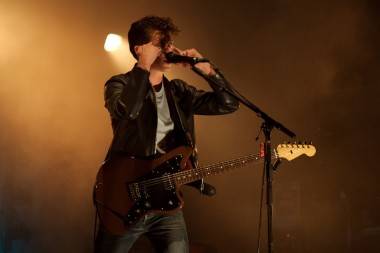 Hundreds of teens emptied their dorm rooms on Wednesday night for the chance to see Arctic Monkeys perform at the Orpheum. The unruly rockers delighted loyal fans with their mix of punk, metal and pop in the resplendent theatre.

Kicking off the early show, the Smith Westerns put on a pleasant, but rather mellow and ordinary set. The Chicago indie outfit’s airy garage-pop songs were not enough to get the crowd riled up. That all changed as soon as the lights dimmed for the Arctic Monkeys.

The cheeky band entered to Hot Chocolate‘s “You Sexy Thing”, totally playing up their British rocker sex appeal. Singer and guitarist Alex Turner looked like the leading man in a greaser flick, sporting slicked back hair and a leather jacket. Adoring female followers next to me looked like they were about to faint when he eventually peeled off the jacket, and were begging to see more skin. Hormones were definitely raging as the group played quite a number of their doo-woppy tracks like “She’s Thunderstorms” and “The Hellcat Spangles Shalalala”.

The band didn’t cater solely to the ladies; the fellas banged their heads along to heavier numbers like “Pretty Visitors” and “Don’t Sit Down Cause I’ve Moved Your Chair”. The former sounded very close to early Misfits, with its simple chord progression (courtesy of guitarist Jamie Cook) and contagious melody. Hell, Turner even sounded like a crooning Danzig. The audience did not miss a lyric or a beat singing along to the upbeat and catchy “Fluorescent Adolescent” and “505”. Drummer Matthew Helders took his turn on lead vocals for the high-voltage “Break by Break”, slowing down at the bridge for a grooving bass line from Nick O’ Malley.

Fans ate up all of the band’s “classics”, but seemed a little more indifferent to tracks from their latest record Suck it and See. The record takes a slight departure from their melodic punk style and experiments with a grittier garage sound. Nonetheless, Arctic Monkeys put on yet another standout show in Vancouver. The night ended with Turner slapping his mic stand onto the ground, the band exiting to a standing ovation, and a determined fan being dragged off the stage by security. Those factors considered, it was a somewhat typical, but successful rock show.