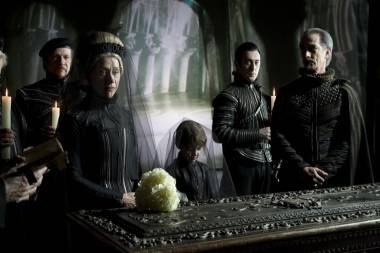 10 of the strangest Shakespeare movie adaptations

Excuse the rather crude terminology, but Helen Mirren has always been a ballsy actor. She’s taken roles that most other actors would pass on in favour of lessÂ  mind-warping fare. Right out of the gate, in 1969, she starred in Age of Consent, playing the muse of artist and over-the-hill pervert James Mason. Peter Greenaway’s The Cook, The Thief, His Wife, and Her Lover was also a deftly original choice. And while recent years have seen her cashing in on her 2008 Oscar-winning turn in The Queen, Mirren still packs a wallop when she wants to.

Case in point: The Tempest, the latest filmed version of a Shakespeare play, running in Vancouver Aug 5 – 11 at Vancity Theatre, and directed by Julie Taymor. The twist is that Taymor has flipped the gender of the lead role from male to female, from Prospero to Prospera. Exiled to a distant land, Prospera, aka the Duke (Duchess) of Milan,Â  dabbles in sorcery to return his (or in this case, her) daughter to her rightful position among the nobility.

Personally, I’m pulling for Taymor on this one. She has had a rough ride this year, catching the majority of the blame for the ludicrous Spiderman debacle on Broadway: Taymor was the original director before leaving due to “creative differences”.

Yet, the Bard has always been a tough cinema sell for me. To Taymor’s credit, her version of The Tempest looks very 21st century. Trouble always hits, however, in filmed versions of the bard when the actors begin to speak, and the haughty tradition of Shakesperean acting takes hold of even the most natural of thespian talents.

My favourite movie adaptations of Shakespeare have always been those that have taken the strands and weaved a somewhat new tapestry, including these 10 Shakespeare-themed films.

A Double Life (George Cukor, 1947) – Screenwriting husband-and-wife duo Ruth Gordon and Garson Kanin teamed up with director George Cukor for this crime drama about an actor who becomes absorbed in his roles – so much so, that upon taking a role in Othello, and finding his advances spurned by a dazzling young woman, he begins an Othello-like plot of murder and jealousy.

Throne of Blood (Akira Kurosawa, 1957) – Kurosawa used the Macbeth saga as his inspiration on this tale of a power-hungry man and his even more power-hungry wife who attempt to fulfill a prophesy that he will become emperor. Isuzu Yamada gets my vote for greatest screen version of Lady Macbeth ever: she’s downright sinister.

Rosencrantz and Guildenstern are Dead (Tom Stoppard, 1990) – Who better to interpret the work of a one-of-a-kind British playwright than Tom Stoppard, a one-of-a-kind British playwright. Here, two minor Hamlet characters are followed, essentially off-screen (or stage, as it were), as the main Hamlet saga plays out all around them, forcing the pair to ultimately confront the futility of their own existence.

Prospero’s Books (Peter Greenaway, 1991) – Apparently, getting this project off the ground was actor John Gielgud’s major preoccupation for most of his adult life. He approached numerous directors over the years before finally convincing enigmatic Welsh director Peter Greenaway (who also directed Mirren in The Cook, The Thief, His Wife and Her Lover) to take the reigns. Source: The Tempest.

My Own Private Idaho (Gus Van Sant, 1991) – Ostensibly, the film is about the friendship, and deterioration thereof, between two hustlers in Portland. But sections of this film, chiefly the idea of a younger generation trying to avoid becoming like the older one before ultimately succumbing to just that phenomena, were based on Shakespeare’s Henry IV.

Romeo + Juliet (Baz Luhrman, 1996) – Luhrman has always been large on style and low on substance (though to be fair, I couldn’t stomach the idea of sitting through 2008’s Australia so I have not seen his entire oeuvre), and his take on R&J was a very modern telling of the classic tale of star-crossed lovers.

Hamlet (Michael Almereyda, 2000) – Ethan Hawke takes the titular role of the Danish prince on the warpath for revenge, this time in modern day NYC.

As You Like It (Kenneth Branagh, 2006) – Branagh’s back to what brought him fame in this 2006’s version of As You Like It. In Shakespeare’s rom-com, Rosalind is banished from high society just after falling head over heels for Orlando. She returns in disguise to find out if her affections are reciprocated. The spin here is that Branagh uses pre-20th century Japan as the setting.