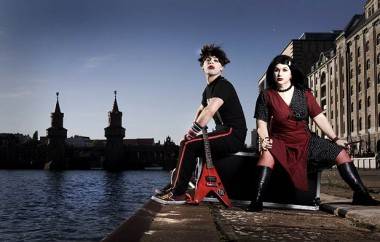 Gleeful and outrageous, Kunst Rock (Art Rock) is a musical circus of cleverly crafted silliness. A pseudo-parody of The White Stripes, with clowning faces, incestuous undertones, and miniature instruments, Die Roten Punkte (The Red Dots) present themselves as a brother and sister rock duo from Berlin.

Otto, an over-enthusiastic front man with smudged red lipstick, and his feisty drummer Astrid perform infectious songs from their third album, Kunst Rock, such as the indie-punk “Burger Store Dinosaur” and synth-laden ’80s number “Ich Bin Ein Roboter (I Am a Lion)”.

But this is no ordinary concert – and how could it be with two such characters at the helm? Endearing and frustrating, affectionate and cold, unified and fractured, their earnest desperation for success – and the spotlight – is compelling.

Too bad Otto keeps falling over cables and forgetting his place in songs, while Astrid gets herself tied up in her own clothing during a striptease and interrupts the concert each time she’s unhappy with the performance.

Die Roten Punkte has been compared, with cause, to fictional bands such as Spinal Tap and Flight of the Conchords, but is accompanied by an innocence lacking in both of these, admittedly genius, examples.

The band’s childhood woes – explored in the show’s own miniature rock opera, “The 4.15 to Spandau Will Not Run Today” – is fantastical enough to be a Roald Dahl story. As we hear of the gruesome death of their parents (a lion ate them whole), we feel genuine empathy for the duo, even if it is accompanied by guffaws. When Astrid’s betrayal leads to a brief dissolution of the band, their reunion is wildly celebrated by the audience.

This ability to work a room is one of Die Roten Punkte’s triumphs. The abandon with which Otto and Astrid throw themselves into their larger-than-life roles, and their absence of self-awareness, lets the audience enter the spirit of the show completely. Sometimes that involves belly laughing at the band’s lyrics; sometimes it means trying really, really hard to the loudest during a sing-off.

There’s a concern that the show could flat line about a third of the way in: there is only so much mileage to be taken from laughing at the same old character defects, after all. And the show does try to run too long on variations of the same material.

But Kunst Rock explores the siblings’ relationship enough to add real heart to a myriad of jokes and songs, making for a bemusing and joyous show.

For tickets to Kunst Rock (at the Cultch until Aug 13) go here.