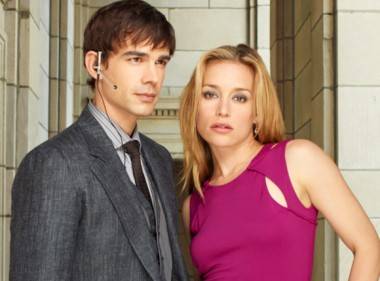 Ringer, Psych and Covert Affairs at the 2011 San Diego Comic-Con

Stars with TV shows to promote took over Ballroom 20 yesterday, July 21, at the 2011 San Diego Comic-Con. Look at the best choices for corner tv mount ideas to watch all your tv shows !

The big sell for many was the appearance of Sarah Michelle Gellar, the actress who played Buffy in the long-running vampire-slayer series (talk about ahead of its time!) and who is returning to TV this fall with a new show called Ringer. Other panels featured cast and crew members of the USA Network shows Covert Affairs and Psych.

– Covert Affairs – Piper Perabo is hot. That was our takeaway from the panel on this Toronto-shot spy show. Admittedly, we’ve had a thing for Piper since her 2000 double-shot starring roles in both Coyote Ugly and The Adventures of Rocky and Bullwinkle. Now she’s starring in the USA Network’s Covert Affairs as Annie Walker, an innocent civilian drawn into the world of spies. Perabo appeared on the panel along with co-stars Christopher Gorham and Peter Gallagher (best line: “I’m flattered that Comic-Con is using one of my eyebrows for its logo”) as well as exec producer Doug Liman. Tidbits about upcoming episodes include Perabo’s contention that her character’s love life “gets pretty crowded” and that Santiago Cabrera from the TV show Heroes will make a guest appearance. As a send-off, the panel ended with a blooper reel. 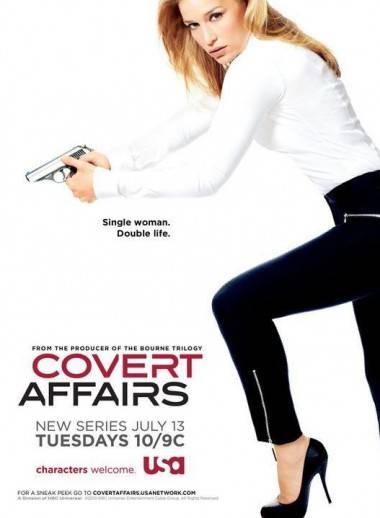 – Psych – Ninety murders! That’s how many crimes this show’s fake psychic character, Shawn Spencer (James Roday), has already solved. You’d think he’d have some cred with the police department, if not Nancy Grace by now! Still, ask the fans and they’ll tell you that they watch the show not for Spencer’s crime-solving abilities but for the chemistry between his character and that of his partner Gus (DulÃ© Hill), and also for the pop culture references that litter the show. In fact, creator/writer Steve Franks, appearing on the panel along with actors James Roday, Corbin Bernsen, Maggie Lawson, Timothy Omundson, Kirsten Nelson and moderator/series regular Kurt Fuller (who also played the father in Woody Allen’s Midnight in Paris), announced some familiar names as guest stars on the coming (sixth!) season. Among those mentioned: Cary Elwes, Molly Ringwald, Malcolm McDowell, Danny Glover, Wade Boggs and William Shatner. Franks also promised a musical episode, though Psych fans will have to wait for the seventh season for that treat.
– Ringer – People love Buffy the Vampire Slayer, and they love Sarah Michelle Gellar nearly as much, judging by the enthusiasm shown by many of the 4,000 attendees at yesterday’s Ringer panel. The show marks the return of Gellar to the small screen, and features the actress – looking ultra-tan on the panel, where she appeared along with handsome devils and Ringer co-stars Ioan Gruffud (The Fantastic Four) and Nestor Carbonell (Lost, The Tick) – as twin sisters. One is in recovery, the other has her life a little more together – or so it seems. Murder, mystery and intrigue were promised in the teaser trailer and by the panel: Gellar, an exec producer of the show, said the show’s script was the first she’d read in a long time that took her by surprise.