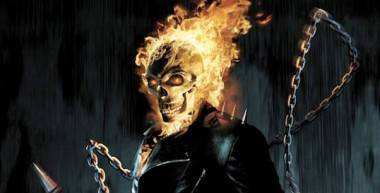 – The guys who did Crank 2 are trying their hand at making a Ghost Rider movie that isn’t terrible. Nicolas Cage is still in it.Â SuperHeroHype has some scans of this month’s Empire Magazine with the first promo images, including a sweet looking Ghost Rider, a puzzled looking Cage and a manic looking Irdis Elba (The Wire,Â Thor) who now also stars. The same issue ofÂ Empire Magazine had a bunch of Judge Dredd stuff in it too if, you know, you’re super old and remember Judge Dredd.