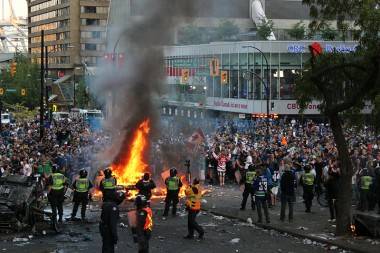 Louise P. on the June 15 Riot in Vancouver

Our friend and social commentator Louise P. was “lucky” enough to see the final game of the Stanley Cup playoffs in Vancouver last week. On a night that will live in infamy until the day Vancouver sinks into the ocean, Louse and her father, a season ticket-holder, managed to get into Rogers Arena and watch the Canucks lose 4-0, only to come out and find downtown on fire. We talked to Louise the day after the show, June 16; to hear her take on the game go here.

In the second part of our chat, she talks about what she saw the night of the riots.

LP: When we were walking, it kind of looked like a nuclear holocaust. There was all this smoke coming up from up on Georgia, my dad said look at all that smoke and I said “Oh yeah”, not thinking anything of it. But it smelled really weird, I thought it was pretty strong, I thought I wonder what that is. Anyway that was the fire on the car in front of the post office. It was a disaster.

What I couldn’t understand was why the police took so long to come.

I saw the fire, we were there on the corner where the CBC is, going into the library.

SC: It was weird, it happened right outside my old workplace

LP: There were all kinds of hooligans on top of the Queen Elizabeth thing, they have a flat roof, there were a bunch of them there. I just kept wondering where the police were.

Listen to this: So finally, finally, and obviously this fire had been going on for awhile, they started looting before the game was over, and we were still at the game at least half an hour after it was over, and the cops still weren’t anywhere, So then, they came out of this hallway, the building connected to the library, seven of them, and it looked like the Mod Squad! I thought, get serious! A woman who was skinny with glasses, an Asian guy, a guy with a turban, I thought, what is this! It was like a mosaic of every race you could find, and they looked like they were 20 years old! And I thought, What’s this going to do? This is a joke! Seven? Yeah, good luck! I don’t think the police were ready for this at all, I don’t care what they say. It took them all night to get the squad out.

Did you see the lines they made on Robson, how they were in form? When they had their riot gear on? They were just standing there in lines, like they did on Commercial Drive, when it was that Olympics thing? Remember when I went to watch the torch? And there were the rioters, and the police came then too? It was the same thing but more. People were throwing things at them! Gates and fences. It was awful! Brutal! Unbelievable! Did you see The Bay got rammed? The Bay is all blasted out! And the cars at the Bay were on fire, a nice BMW! It was incredible! And people were just staring, taking pictures! Throwing bottles in there, alcohol, watching them blow up. And the London Drugs, that was all looted out too. And Chapters! And Sears. Unreal. Unreal. 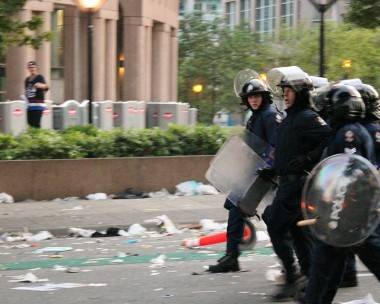 There were a hundred thousand people down there. The police said it wasn’t their idea to have the big screens everywhere, so I guess they’re putting the blame on Mayor Gregor Robertson.

SC: The city tries to do something nice…

LP: And my mom was like, “Well it’s his fault, they should try to keep traffic moving.” And I said, “yeah, but they’re trying to do something nice.” And I can see the rationale. The Olympics went smooth, so people are not in that mode. Well, think again.

Because the only people who went down to the CBC site were teenagers – I never saw any normal people down there – they were all teens and 20something-year-olds. Who else would be stupid enough to go watch a game there? No adult’s going to fucking do that.Ridiculous.

But I can’t believe the looting! And women – they were all into this too. Girls are the worst! But did you see the guys jumping into the fire? The car that was on fire? They were jumping over it and one guyÂ  jumped over it but he missed and fell into it and jumped out and he was fine? These people were stupid! Did you see someone was climbing on the pole the traffic light hangs from. Someone was climbing on that! It’s just… fuck. Anyway. These people are obviously stupid because everybody has cameras and Internet and it’s going to be all over the place. But what are they going to do, put a bunch of teenagers in jail?

LP: And when the Bay got broke into, this girl said to a couple of guys standing there, “Can you go get me a purse?” And they said “No.”

SC: Where did you hear that?

LP: One of my news stations. I was listening, watching. I was really ticked because Tamara Taggart’s station was having a live stream and suddently it stopped and I spent another hour trying to find another one and I couldn’t.

SC: Were you up late watching this?

LP: Oh yeah. And then I started watching replays.

But Boston clearly deserved to win. They were sharp. Fuck, they were sharp. Their goalie’s amazing. It just wasn’t working for us. Besides the fact that everyone’s biased against the Canucks, even so they couldn’t score, they couldn’t get it together. Luongo was not in his sharpest form. I don’t know why they didn’t play the other guy. Schneider.

LP: What do you know about hockey? You better not be writing this on the Internet and putting my name on it.

SC: It’s all going up my friend.

LP: Well don’t! Because I have a Luongo jersey and I don’t want to be saying anything bad about him at all. 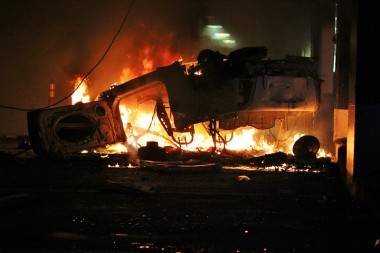