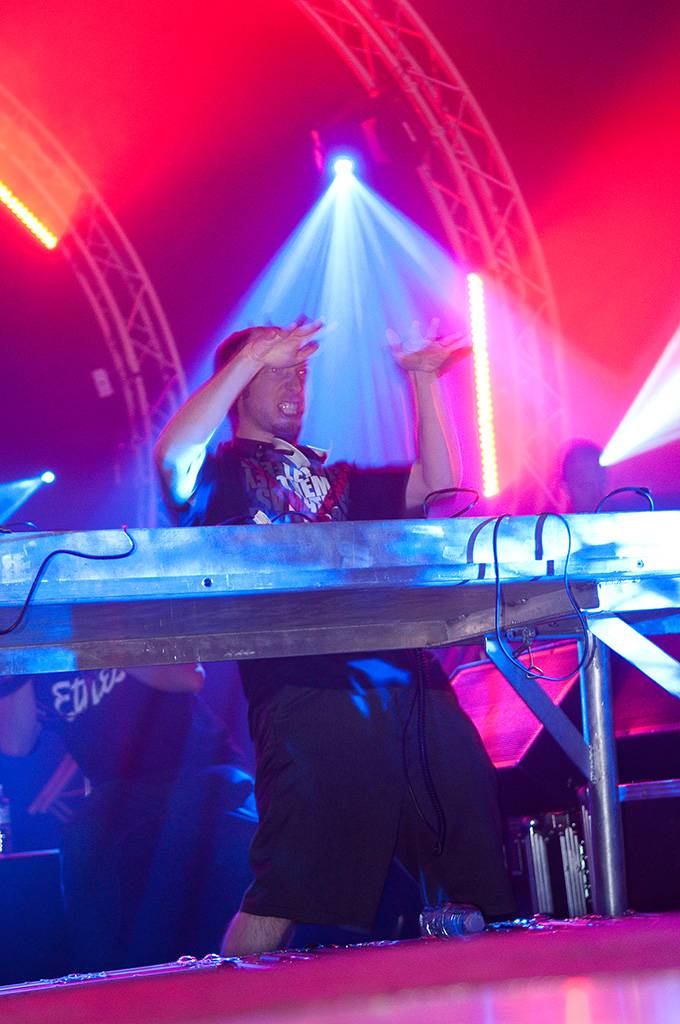 The night boasted a 100,000 watt sound system, direct from the Village stage at Shambhala, and a lineup unheard of in Vancouver history – Datsik, Excision, Dieselboy and Crystal Method. Both old school techno/d&b fans and new school dubstep fans were in luck, as both sounds were well represented by these legendary artists.

The venue, perhaps not such an odd choice if class had in fact been in session, was quite a trek to reach. The hour-long bus ride, crammed with smelly old men and screaming babies put a bit of damper on the fun. The choice of using UBC’s brand new Thunderbird Arena was definitely strange, as classes at the university were out in April and the venue was only at half-capacity the entire night. Perhaps the lengthy distance from downtown and the ‘burbs, along with the $55 ticket price, early start time and lack of alcoholic concessions, contributed to a less-than-stellar turnout.

That said, the quality of talent and production value most definitely warranted a higher priced ticket. MSH Sessions booked a solid lineup of world-class talent and PK Sound brought the bass in a serious way, which for dubstep and D&B is a must. Those without the foresight to bring earplugs were no doubt ringing for days after. Sound quality overall was excellent, which is a feat for an arena show. With the exception of some technical difficulties during the switchover to Crystal Method’s gear, the musical part of the night went off without a hitch.

The visuals were impressive, with two large projection screens and a custom made lighting rig that resembled a huge spaceship hovering over the stage. The lighting and smoke were complementary for the most part and added an element of the theatric to the show. One major disappointment, however, was the distinct lack of lasers, which are to be expected in big arena shows catering to the “nu-rave” generation.

The standout act of the night was no doubt Excision, with his punishing blend of vocal-driven anthems and industrial-influenced dubstep. Bringing the energy levels up after a lukewarm reception to the Crystal Method (perhaps a little too old school for the majority of a 19-22 year old crowd), Excision blasted the crowd with more bass than they could handle. His style, while thoroughly modern, is perhaps not pushing any boundaries for musical innovation, but his crowd-pleasing anthems and engaging stage presence made it difficult not to enjoy his set.

Other points of note were the very professional and friendly event staff who did an excellent job of running the event smoothly. A minor police presence was noticeable, but they were mostly doing casual spot searches for contraband (which is to be expected at a dry event).

A distinct lack of strung-out zombies or excessively high dance floor causalities was a pleasant surprise for this reviewer, perhaps proving that you can throw alcohol-free 19+ electronic music events in the city without suffering from over-usage of other less legal substances. Massive props to MSH Sessions and PK Sound for another very successful event!