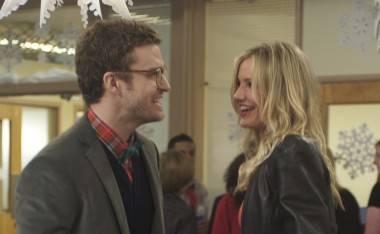 Justin Timberlake and Cameron Diaz in Bad Teacher, which opens this Friday June 24.

We’re bad – a look at ‘bad’ movies through the years

Cameron Diaz, one of the few women trusted to open a Hollywood film, will attempt just that feat this weekend.

Lurking somewhere within the tall weeds, hoping to snag that elusive mantle of “sleeper hit”, Bad Teacher will mount a challenge against the typical summer blockbuster fare.

Her latest venture seems like a take on the Mark Harmon ’80s vehicle, Summer School, at least in spirit. Diaz plays a teacher, attempting to land a colleague after being ditched by a man with the means to keep her gainfully unemployed. Laughs will be had, lesson will be learned, etc.

To ensure you need not use your brain upon entering the theatre, Bad Teacher film provides you all you need to know about Diaz’s character in the title: she is a bad teacher. As off putting as it is to be spoken down to so plainly, there have been some interesting, provocative, bizarre, and downright funny (of both the laughing at you, and with you variety) films that have used the same ploy.

So rather than provide a video reminder of sappy, heartwarming, and cheeky teacher flicks, instead, I present a list of other films beginning with BAD.

Bad Timing (1980) – Nicolas Roeg directed real-life flame Theresa Russell, as well as Harvey Keitel and Art Garfunkel, in this trip of a film. Set in Vienna, a woman is brought to hospital after overdosing on pills. After a closer look, local police begin to suspect her lover, a psychology professor.

Bad Day at Black Rock (1955) – A man with one hand and a terrible secret arrives in a one-bit town where the locals refuse to mind their own business. Starring Spencer Tracy.

Bad Girls Go To Hell (1965) – A cult-ish escapade directed by Doris Wishman in which a young housewife who, after dispatching her rapist, flees her reasonably comfortable existence, only to find her identity at risk by the detective son of her new landlady.

Bad Santa (2003) – Director Terry Zwigoff hits another home run (does he ever strike out?)[yes – Art School Confidential. – Ed.] with this tale of a con man who poses as department store Santas in order to establish the lay of the land and pilfer the place blind. Originally scripted by the Coen brothers.

Bad Lieutenant (1992) – Harvey Keitel, again, stars as possibly the most corrupt cop New York City has ever seen, and that’s saying something.

The Bad Sleep Well (1960) – Akira Kurosawa’s revenge film about a young man who marries the daughter of the man responsible for his father’s death.

Bad (1977) – Andy Warhol backed this film of a woman not entirely satisfied with her beauty salon, who hires angry, vengeful women for hits.

The Bad and the Beautiful (1952) – Hollywood melodrama meets Kirk Douglas: a match made in heaven. Douglas stars as a wretched studio mogul looking to regain the heights of a lost career. Directed by Vincente Minnelli, and co-starring Lana Turner and Dick Powell.

Bad Education (2004) – Pedro Almodovar takes on the education system in this tale of longtime friends abused by a religious school system.

The Bad Seed (1956) – Hollywood old-timer Mervyn LeRoy took a late-career stab at an unfamiliar genre: the psychological thriller, with this tale of a mother who begins to suspect her daughter of unthinkable crimes.