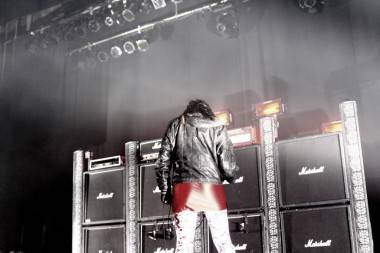 Snipe photog Anja Weber was on hand for the Sleigh Bells show at the Vogue Theatre.  The Brooklyn-based band is on tour for their debut album Treats.

The duo consists of songwriter/guitarist/producer Derek E. Miller and singer Alexis Krauss. The former used to be in a hardcore band, Poison the Well, while the latter was a member of a teen-pop group called Rubyblue. She was working as an elementary school teacher before she quit to do Sleigh Bells full-time.

They released Treats in May 2010, along with the singles/videos “Tell ‘Em,” “Infinity Guitars,” and “Riot Rhythm.” The well-reviewed album made several year-end best-of lists, including Pitchfork‘s, Paste‘s, and PopMatters‘. The track “Rill Rill” contains portions of “Can You Get to That” by Funkadelic. The album follows a self-titled EP in 2009.

One response to “Sleigh Bells at the Vogue Theatre, Vancouver, May 25 2011”