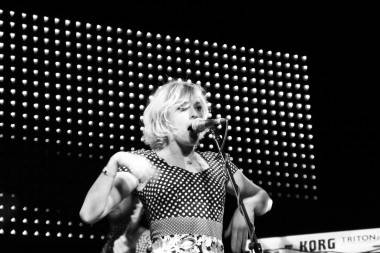 Review and photos – The Pipettes at Venue, Vancouver, April 29 2011

While people lined up around the block for the latest flavour-of-the-month beardo band across the street, a small but appreciative audience came out for one of the more colourful Britain’s more colourful pop exports.

The last time The Pipettes came to Vancouver, the pop group sold out (or nearly sold out) Venue, which was then known as The Plaza. This time, maybe 70 people were on hand to greet the act in the same room while Fleet Foxes sold out the Vogue Theatre (the Seattle-based folkies have another show there tonight).

Granted, pop music fans’ tastes are fickle; Lady Gaga was still Stefani Germanotta when The Pipettes released their debut, the charming and pithy pop pastiche We Are the Pipettes. Their just-released follow-up Earth vs. the Pipettes has received absolutely no record company push (after posting a Pipettes interview and show preview, we’re still waiting on a digital download). And it could be argued that this year’s model is almost unrecognizable, with Gwenno Saunders the only remaining Pipette from the three that were here last time.

Still, the backing band – Monster Bobby and the Cassettes – are the same, and it could be argued that two Pipettes are as good as three when those two are the likable Gwenno and her sharp-tongued sister Ani. And how many acts these days willfully and capably call up classic girl group sounds with a modern spin?

Not enough, we say.

The ladies gamely rose to the occasion despite the barely half-full room as they and the Cassettes ran through the debut’s most memorable moments (“Pull Shapes” ended the set, “Dirty Mind” was also in there as was “Your Kisses Are Wasted On Me”) along with new songs such as “Stop the Music” and “Our Love Was Saved by Spacemen”.

On first blush, the latter aren’t quite as catchy as the debut’s best moments, although “Thank You” was a stand-out. Throughout the set the Saunders sisters, in dresses with polka-dot tops and matching flower-print skirts, kept up synchronized vintage dance moves, bringing a kitschy and fun showbiz aspect to the fluffy pop; behind them, the band played well but seemed a little bored (or maybe disappointed at the turn-out), so it was best to focus attention on the singers.

To their (and the audience’s) credit, Gwenno and Ani were able to coax the shy Vancouver crowd onto the dancefloor to make the show a more enjoyable experience (Gwenno – or was it Ani – even thanked us for coming to see them instead of the “well boring” Fleet Foxes). It’s pop music, after all, disposable and fun, and it works best when everyone can let go and get off on the pure double-rainbow joy of the tunes and performance. After all, we could be in for a long winter of whinging folkie beardo bands before we see the likes of The Pipettes again.

The Pipettes play the Doug Fir Lounge in Portland tonight (April 30) and the Crocodile Cafe in Seattle tomorrow night (May 1).

Opener Louise Burns played to even fewer people. With a six-piece band, including back-up singer Jody Glenham, the Vancouver-based singer/songwriter delivered full, lush versions of songs off Mellow Drama to people trickling in at the unrock ‘n’ roll hour of 8 p.m.

Mellow Drama has its share of terrific ’60s-influenced pop, but of the more jangly variety; “Drop Names Not Bombs” is a winner, though “What Do You Wanna Do” (which, along with Burns’ bangs, should appeal to She and Him fans) comes a close second. Burns seemed a little stiff, or maybe just stage-shy; choreographed stage moves aren’t necessary, but it would be nice to see her loosen up a little. 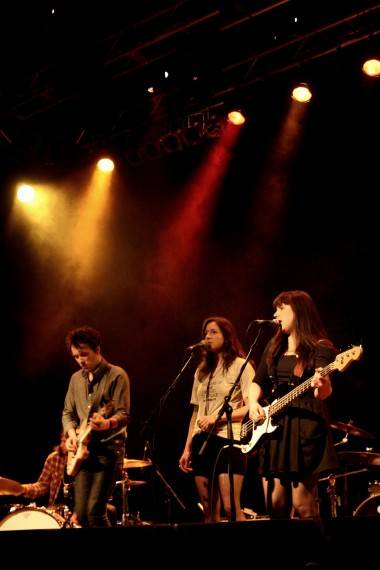 2 responses to “The Pipettes at Venue”