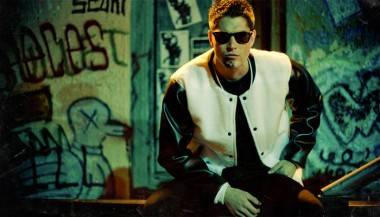 Interview with Hobo With A Shotgun’s Nick Bateman

What began as an homage trailer to exploitation flicks of yore made for pennies has turned into a blood-spattered pipe dream for first time feature director and Halifax native Jason Eisener.

Hobo With A Shotgun started as a contest submission for a trailer to appear as part of the four-hour Quentin Tarantino/Robert Rodriguez joint Grindhouse. Now, Hobo has become the second of those trailers (after Rodriguez’ Machete) to be transformed into full feature, with cult fave Rutger Hauer (The Hitcher, Blade Runner) as the titular hobo with a firearm.

Nick Bateman plays Ivan, a deranged if goofy psychopath prone to tossing the sharp ends of hockey skates into people. An actor, Capilano College alum, model and martial arts world champion multiple times over, Bateman talked to Guttersnipe prior to the Toronto premiere of Hobo With a Shotgun about sharing the stage with a legend, not settling on one career, and blood trucks.

Clint Hallahan: Are you going to bring your parents to Hobo With A Shotgun?

Nick Bateman: Yeah, I’m actually going to bring my mother and my Nana. They’re very young at heart. I think it will be up my mom’s alley. My mom told me she had me for two reasons: for someone to watch scary movies with and for someone to go on roller coasters on. Apparently it’s what I was born for.

CH: Did the buckets of blood in the film bother you at all?

Nick Bateman: No, they didn’t bother me at all. They [the makeup artists] had their own blood truck on set. They went through, I think I heard one hundred gallons of blood. I just remember the poor guy who ran the truck yelling “We need more blood!” He had to make a concoction of all this new blood because every scene because there was so much.

CH: When you first got the script, what was your reaction?

Nick Bateman: I saw the first five pages and I couldn’t believe they were gonna put some of this in a movie. It was really hard-hitting stuff. But it was supposed to be fun and not offensive, I kinda took it for what it is for this grindhouse genre. I got pumped up and wanted to get going on this.

CH: How was sharing a set with Rutger Hauer?

Nick Bateman: Rutger Hauer was great. I really tried to pay attention to how he acted because he always tried to switch it up and bring something new to the set. The first day I shot with him, I think he got really into his character. We’re enemies in the movie, so on that first day when I first met him and was getting a real enemy vibe. It was great to work with him. I got to bust through a door and beat down Rutger Hauer. How many people get to say that? 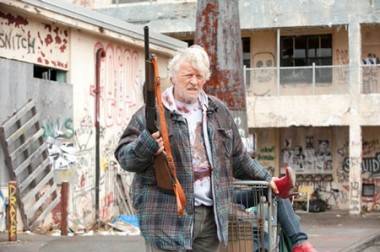 Rutger Hauer in Hobo With a Shotgun.

CH: How did your background in martial arts prepare you for acting?

Nick Bateman: Martial arts has prepared me for everything. It’s a life skill. When you compete you compete in front of thousands of people, and sometimes the stage sometimes the spotlight’s just on you. So for me to have to control my emotions while manipulating a weapon… on a movie set it seems a lot toned down. It prepared me for anything I need to do, because if I can control my emotions in any way on a stage in front of thousands of people on a stage I can control it on a set.

CH: Do you think you could give everything else up and act full time?

Nick Bateman: There’s always going to be downtime. Even if you are a huge movie star, you are never going to go from movie to movie to movie. You’re always gonna have downtime. Maybe if you get a TV show or something. I used to have a karate school and I shut it down, unfortunately, and I really miss my students, I shut it down to make this movie. So I think in between I would teach my students that I teach all over the world. I think I can keep this juggling going. If acting did get more and more, yeah I think it would be my main focus because I’ve achieved what I wanted out of the other two.

Hobo With A Shotgun opens in theatres across Canada today (March 25). 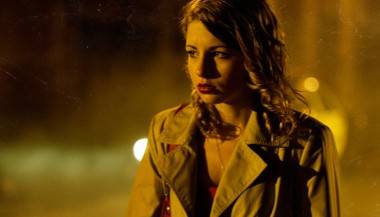 Molly Dunsworth plays a hooker with a heart of gold in Hobo With a Shotgun.