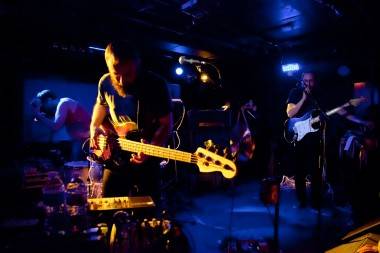 If there’s one thing I love, it’s big cinematic openings, and Akron/Family nailed it Friday before a near-capacity crowd at the Biltmore Cabaret.

Touring in support of their album S/T II: The Cosmic Birth and Journey of Shinju TNT (now Internet-famous for the multiple different “teaser” versions surreptitiously leaked by the band), this post-rock/experimental/indie outfit blew us away with strong instrumentals, engaging stage presence and one of the strongest indie cult followings I’ve ever seen in Vancouver. For a band that claims they sound like “Village People meet Carlos Castaneda on a vision quest,” this is not so surprising. 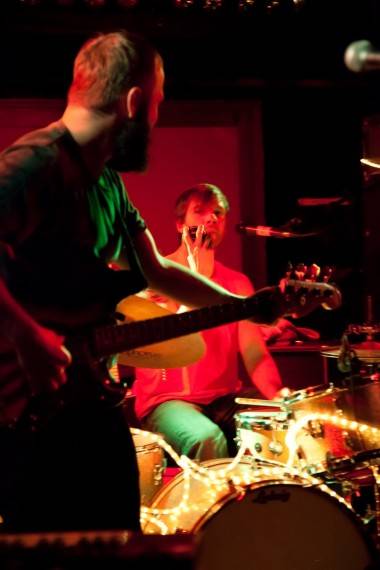 Akron/Family are a perfect example of the chemistry that only comes to musicians who have played long and hard together. This is a success story forged by time on top of existing talent and maybe even a bit of luck, and coming of age in the indie music/hipster mecca of Williamsburg, Brooklyn couldn’t have hurt. While it’s tempting to describe the band as three guys who play drums, guitar and bass, they really are so much more. Each uses his instrument and voice as well as assorted synthesizers, loop stations, and percussion items to layer, blend, distort and/or sooth each sonic layer within the song.

Their songs come across more like compositions, in spite of the fact that more than half of each one was almost completely improvised. The intention and manner in which they compose and present seems very thought-out, sometimes even formulaic at times, but not to the detriment of the creative process. In fact, they seem to have established a structure to their songs that in itself creates the boundaries for truly magical improvised moments to happen. Some songs were jammed out longer than others, and perhaps, for one or two moments, they squeaked over the line into self-indulgence, but this is easily forgiven. 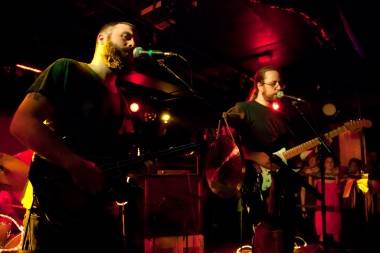 The band mostly stuck to material from the new album, but did graciously play old favorite “River”, which featured a distinctly 80’s dreamy synth-pop feel and incited much crowd participation. “Island” was prefaced by what I can only describe as a guided meditation led by Seth Olinsky, who had everyone standing on one foot, pointing at the sky and swaying side to side, all while imagining themselves on a tropical beach somewhere. This metaphysical moment was carried through the rest of the set, which had most of the audience clapping rhythms, returning vocal call and response themes, as well as carrying an amazing extended bridge on “Another Sky” a capella for two solid minutes before the band joined back in. There were many beautiful moments when the band meandered into distinctly tribal territory, only to come blazing back in with psychedelic guitars or a heavy rock riff. I found myself comparing them to Canadian outfit Do Make Say Think, and was not surprised to learn that they actually did guest vocals on two DMST albums previously.

I like what Olinsky and the rest of the band was trying to accomplish with their borderline cheesy incitement to crowd participation. I think Vancouver of any city can be guilty of the passive consumer of music experience mind frame, otherwise known as the “I’m too cool/awkward/uncomfortable to do anything but stand here with my arms crossed and squint at the stage” pretention. What Akron/Family proved was that we all need to let go a little – they do it on stage, so why can’t we do it in the audience? Or how about life in general? So loosen up, throw on some music and just groove a bit. Let go of your inhibitions and rest assured, no one is going to laugh at you. 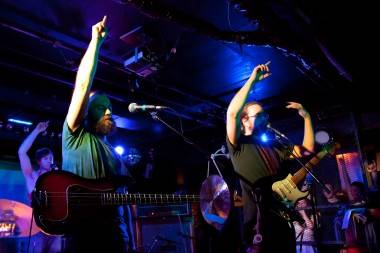 One response to “Review – Akron/Family in Vancouver”