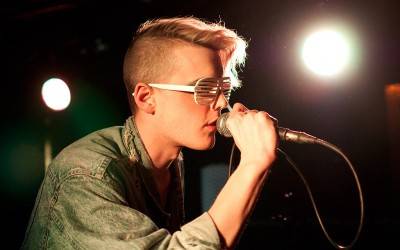 On CBC Radio 3’s website, John O (aka Diamond Rings) is quoted as saying, “I do not believe that there needs to be a disconnect between popular music and lyrical honesty.” That quote doesn’t quite cover the level of honesty that Diamond Rings puts on display as an artist.

Wearing skin tight shiny silver tights, a jean jacket, white hightops, and slotted sunglasses, Diamond Rings’ image is topped off with colourful eye makeup and a bleach blonde mop top with shaved sides. He looks loud and flamboyant, and when he took the stage at the Biltmore, he proved to his rabid fans that the volume doesn’t stop with his looks.

Whether gyrating at his unicorn-adorned keyboard or giving guitar love whilst on his knees, Diamond Rings wasn’t holding anything back. Even falling completely to the ground wasn’t out of the question.

After a couple songs, Diamond Rings took a break to thank everyone for coming, then commented on the weather (“How about that snow, hey?”), saying this is what he does when he’s around people he doesn’t know. 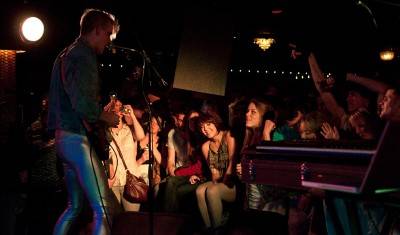 Even if he didn’t get to know the audience by the end of the night, those watching got to know the exhibitionist performer a lot more after he tore off his jacket halfway through his set, baring his thin naked torso to the delight of his fans.

His performance was candy, both for the eyes and the ears. The crowd gave enthusiastic love for opening acts Dbl Dragon, Teen Daze, and Humans, but the night belonged to Diamond Rings.