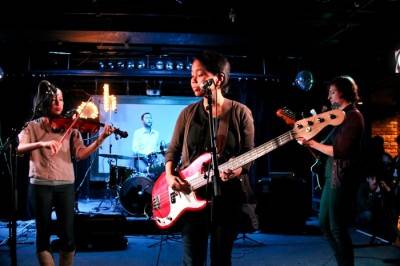 Review and photos–Ohbijou at the Biltmore Cabaret, Vancouver, Aug 11 2010

I’ve never had a sister so don’t know what it’s like but when I fantasize about it, I always come up with the kind of dynamic that’s clear between Ohbijou’s lead singer Casey Mecija and her younger sister, back up vocalist and violinist, Jennifer – a little bit of public ribbing, finishing each other’s stories and really pretty harmonizing.

It certainly felt like a family affair on stage at the Biltmore on Wednesday night, with the six-piece band seeming a little happily delirious from the 12-hour drive that day and the impending 5 am wake up the following morning as they wrap up their Western Canada tour.

But the band’s members, rounded out by Heather Kirby, James Bunton, Anissa Hart and Ryan Carley, were in good spirits – there was a perceptible feeling of support amongst them as they cracked jokes with the audience and put on a high-energy show that highlighted the band’s range from charming and whimsical to darker and danceable.

It wasn’t a packed house but the audience was full of love for the four girls and two guys that make up the Toronto-based indie pop band. They opened the show with a short and soft track from the 2009 album Beacons and followed with their biggest chart-topper “St. Francis”, from the band’s breakthrough 2006 album Swift Feet for Troubling Times.

They played a good mix of old and new stuff, including “Black Ice” from Beacons and “The Otherside” and “Steep” from Swift Feet. Casey’s voice (and Jennifer’s, for that matter) is just as lovely in person as in the band’s recordings so it was unexpected but awesome to hear her break out into the occasional wail and jump up on the speakers when the song called for it.

And like any good Canadian indie act, Ohbijou threw in a couple of covers from fellow colleagues for good measure. One highlight was the audience participation call-and-repeat cover of fellow Canadian Nathan Lawr’s “Barking at your Door”.

One of the nice things about Ohbijou is the way they combine the sweeping orchestral sounds of classical stringed instrument like violin and cello with edgy songwriting, interesting vocal layering and less conventional instruments like the ukulele and banjo, so that the sound comes through as sweet, but not too sweet. The band closed the set with an unrecorded song, however, that hints at tipping the scales toward a harder rock tone and further away from melodic folky compositions that have been defining the Ohbijou sound.

The group came out for two encores, gave some audience members a couple of instruments to play along with and closed the night with a cover of Chad Vangaalen’s “Willow Tree”. Feedback issues and road weariness aside, everyone in Ohbijou appeared grateful and gracious, not taking themselves too seriously and putting on a darling kind of show.