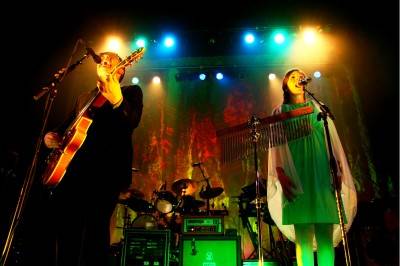 The Decemberists (pictured at the Vogue Theatre, July 22 2009) will be Live at Squamish. JaNicka Grayston photo

Pemberton – no doubt it’s a name that conjures up nightmares for some people, if only logistical. Getting to and from the dusty bowl of a site, a two-and-a-half hour (at best) drive from Vancouver, proved to be a huge challenge and, no doubt, one of the factors that has stalled any plans for Pemberton 2, as great as the first one was, in many ways.

As the closest and most recent BC precedent to Live at Squamish, that 2008 music festival’s shadow can’t help but hover over the upcoming (Sept. 4 and 5) event. But Paul Runnals, producer of LaS (@LIVEatSquamish on Twitter) has learned from the mistakes of Pemberton; Squamish is closer, the drive is “a piece of cake” (his words), and special shuttle buses (both to and from Vancouver and Whistler) offer an easy and green alternative. (Live at Squamish transportation details.)

We talked with Runnals over the phone a few weeks before Live at Squamish. A concert producer with over 20 years’ experience producing concerts and events in Canada, he has worked with Sarah McLachlan, INXS, Prince, Avril Lavigne and Nelly Furtado; recently, he co-produced the nightly 2010 Olympic Victory Ceremonies in Vancouver. 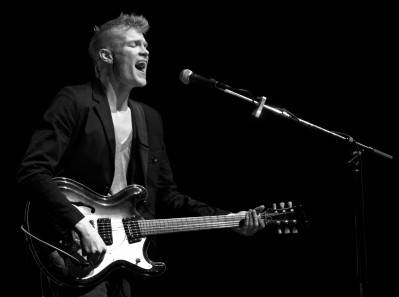 Mother Mother (pictured at the Centre in Vancouver, Nov 09 2009) is among the Vancouver acts at Live at Squamish. Sandra Minarik photo

Live at Squamish: The Origin

Shawn Conner: Live at Squamish seems to have come out of nowhere. Can you tell us a little about its gestation?

Paul Runnels: The gestation goes back a few years. At the time we were talking with another group about putting together our resources to do something in the Squamish area. But then we started working on the Olympics and it got put on the back-burner. We got through the Olympics, and we asked ourselves, now what? Which was quite a common sentiment, a hangover period – it’s almost still going on.

So we sat down in late March and asked what are we going to do this summer to carry on the spirit of the Olympics? And this was the project we really feel like working on. Partly it’s because the meaningful music festivals that used to be held here have come and gone, and left a real void in the market-place. And a lot of them were very ghetto-ized. We wanted to do something that, like Pemberton, blended genres. That template for me is the best template.

SC: Is it a scary time to be inaugurating a festival?

PR: It’s always a scary time. It was scary for Pemberton, it lost a lot of money. The concert industry from a ticket standpoint is taking a beating. You’re seeing it everywhere. Van Morrison did three-and-a-half-thousand people at GM Place [on Aug. 8 – Ed.] and he sold it out last time he was here. What we’re bringing is different from a traditional concert event. For two-days of music, for 24 hours of music you’re paying about the same money as if you were paying for two big-act concert tickets. It will be a big challenge in year one to let people know how easy it is get to the site, which is only 25 minutes from Horseshoe Bay [in West Vancouver – ed.], but once people are there, and they see what a great site it is, they’ll be sold.

SC: Is this first one a kind of loss-leader, where you might lose money but it’ll pay off in the long run?

PR: We hope not. We built a five-year business plan, and we have reasonable expectations we’re going to come really really close. We believe in what we’re doing, and we believe in the scale. Going back to Pemberton – it was a two-and-a-half hour drive in the best of conditions. Once you got there it was a great event, the bands were fantastic, but there were some challenges and real difficulties getting enough people there. We don’t have those same challenges – the drive to Squamish is a piece of cake. We want this to be a stick-around and grow it in a sustainable way. 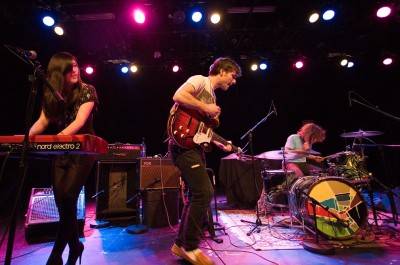 Said the Whale (pictured at the Commodore Ballroom, May 5 2010) is another Vancouver band playing Live at Squamish. Jason Statler photo

SC: Who picked the lineup, and how?

PR: I had a hand in it. A lot of it has to do with who’s touring, who’s available. So we grabbed some acts who are up here for Bumbershoot or playing Sonic Boom in Edmonton.

SC: I was excited to see Devo in the lineup.

PR: They played up in Whistler during the Olympics and brought the house down, people absolutely loved it. I’m old enough to remember when they were in their heyday.

SC: What will be sold on the Live at Squamish site?

PR: There’ll be a wide range of food and beverage, and an elevated delivery of food and beverage in the VIP-ticket section. We’ll have an artisan village, a number of vendors selling their wares, jewelry to carvings, about 25 different vendor groups. We’re not charging them, they’re part of the festival atmosphere, to lend some additional content, so it’s not just about a stage at the end of the field. [Vancouver artist] Davide Pan, who made a large-format sculpture at Pemberton which was moved to the town square, is going to sculpt a piece that will be turned over to the District of Squamish. If you feel like a break from the music, and you want to move around and go, it’s more than music, it’s music, it’s art.