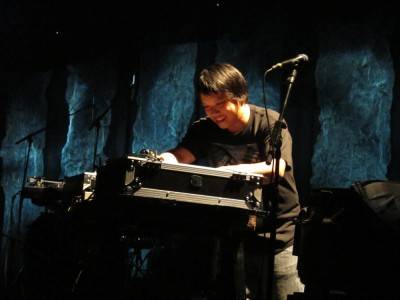 “So this is the Jazz Festival, right?” said Vancouver-born Eric “Kid Koala” Sans, somewhat cheekily as he worked his way into his famous “Drunken Trumpet” routine, where a long trumpet note from a record is dragged under the needle at varying speeds to create different pitches, effectively creating a new solo over a snappy jazz beat. If there are still people who don’t see the turntable as an instrument, that song might just be the thing to win them over. (For those puzzled, I’d recommend checking it out on YouTube:)

In any case, it was probably the closest thing in the show to resemble “jazz” in its strictest sense. But of course, reinvention and experimentation is at the heart of jazz and, likewise, at the heart of Kid Koala’s approach to his music, which mixes in everything from clucking chickens, to the Muppets, to a menu being read in Cantonese.

Just to give you an idea of some of the baby-faced 35-year-old’s accomplishments: along with having three mind-blending albums under his belt, he’s also created a full-length graphic novel Nufonia Must Fall (complete with soundtrack), toured with the likes of Bjork and Radiohead, collaborated with Mike Patton, Deltron 3030, and Amon Tobin, among others.

One of his recent projects is apparently a 3D book/album about a clarinet-playing mosquito. If you ever want to make yourself feel bad about not doing enough cool creative stuff, you could take a look at the projects section at kidkoala.com or go see him play live. But first, lets take a look at the openers.

U.K.’s The Heavy lived up to its name, powering through garage-y soulful rock, and the crowd giving the Commodore Ballroom’s bouncy dance floor a good testing. Fists were pumping in the air almost throughout the whole set, which didn’t seem to keep Swaby, the energetic lead singer, from trying to electrify the crowd further with his mighty vocal delivery, wolf-themed call-and-response, and high-fiving all the people in the front row.

A highlight was the song “Sixteen”, which infuses the classic “I Put A Spell On You” riff with powerful horn blasts. The Heavy treated its set like it was the main attraction, and given the enthusiastic crowd response, a lot of people were there just to check them out. 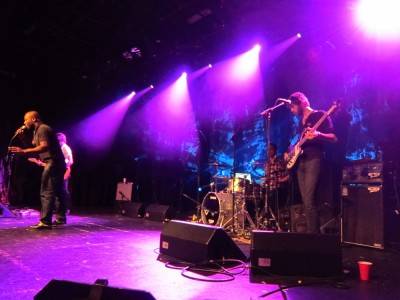 The Heavy at the Commodore, June 29 2010. Monisha Martins photo

Back to our favourite scratch-happy marsupial. A charming reinterpretation of “Moon River” (from Breakfast at Tiffany’s) which layered parts of its instrumental section into a spacey and mesmerizing outro was definite standout in his opening solo set. Kid Koala dedicated it to his mother (it’s her favourite song) while also showing off some gifts that she got him; a sweater for his baby and a T-shirt with the words “New Jazz” and a tiger emerging from a horn. 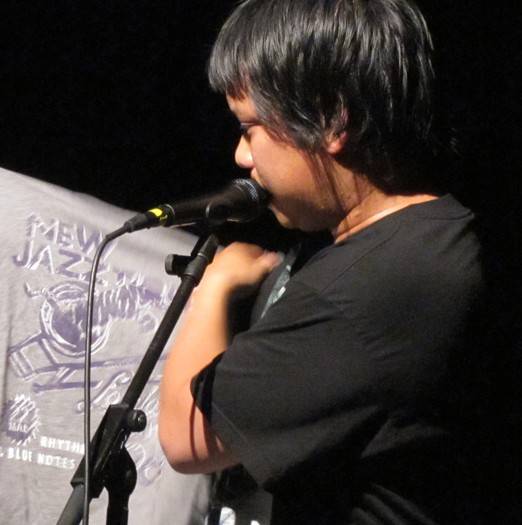 After that heartwarming moment, there was a short break before he came out again with The Slew. The story of The Slew goes like this: Kid Koala and Dynamite D were collaborating on music for a documentary on an obscure Seattle ’70s rock band. The documentary fell through, but they decided to keep going and released the album 100% for free online.

Realizing they would need a rhythm section for its live tour, they got two ex-members of Australia’s Wolfmother (bassist/keyboardist Chris Ross and drummer Myles Heskett) involved. Channeling both Black Sabbath and Public Enemy, they’ve created something moshpit-friendly and loud, basically something that Kid Koala‘s “skater friends would like.” After hand-cutting their own vinyl, building custom earthquake-proof turntables (six are used in the show), and picking up Kid Koala‘s longtime collaborator D.J. P-Love, they hit the road.

A drawn-out rock scream from a spinning record announced their arrival. It would be the first of the impressive disembodied vocals that act as the “singers” for the songs. The vocal samples ranged from shouting crowd-rilers to soulful spoken word, expertly manipulated by the two tireless turntablists.

Koala and D.J. P-Love were a treat to watch, their hands always busy on their tables and often quick-drawing new records from the cases during songs. Even though no one seems to know who the voice samples belong to, it didn’t take long to accept them as a natural part of the band.

The turntablists were also cutting up some meaty guitar riffs, while the Wolfmother boys kept it together with tight and fierce drums, and gritty teeth-rattling bass. Somehow it all worked beautifully, which is to say, it got people leaping and banging their heads, reliving some of their best Lollapalooza moments. 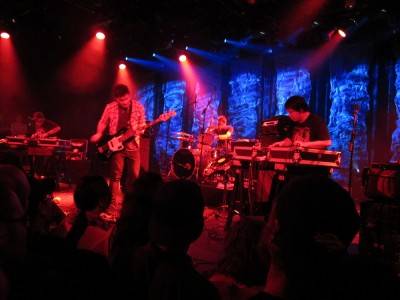 Kid Koala and The Slew at the Commodore, June 29 2010. Monisha Martins photo

Pushing the boundaries of all that is capable in their unconventional setup, one piece had the bassist playing through Kid Koala’s turntable while Koala chopped and altered the notes rhythmically (or at least that’s what it seemed like – one of you gear geeks might need to set me straight on this one). The ominous groove of “Battle of Heaven and Hell” was their encore, leading them to end their set in a weirdly nostalgic way by happily toppling their instruments, including one of turntables, to the floor.

Although I thoroughly enjoyed the show, I’d say that The Slew is the sort of music that my kid brother would be into more than me (am I getting too old and sleepy? Is it too late to learn how to skateboard?). Still, it’s hard not to admire Kid Koala’s skill and inventiveness in his various projects. If his next tour is for his mosquito clarinetist book however (likely to be a lot quieter), you can expect to find me front and centre, cup of chamomile tea firmly in hand. 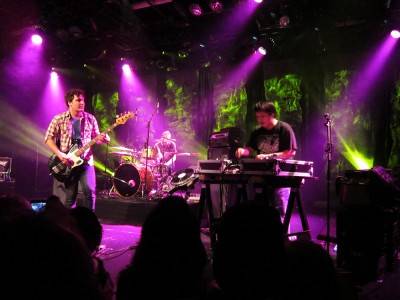